We conclude our Green Lantern Gravity Feed figure previews with none other than two of the Corps’ most decorated and celebrated officers.  We start our day off with Sinestro! 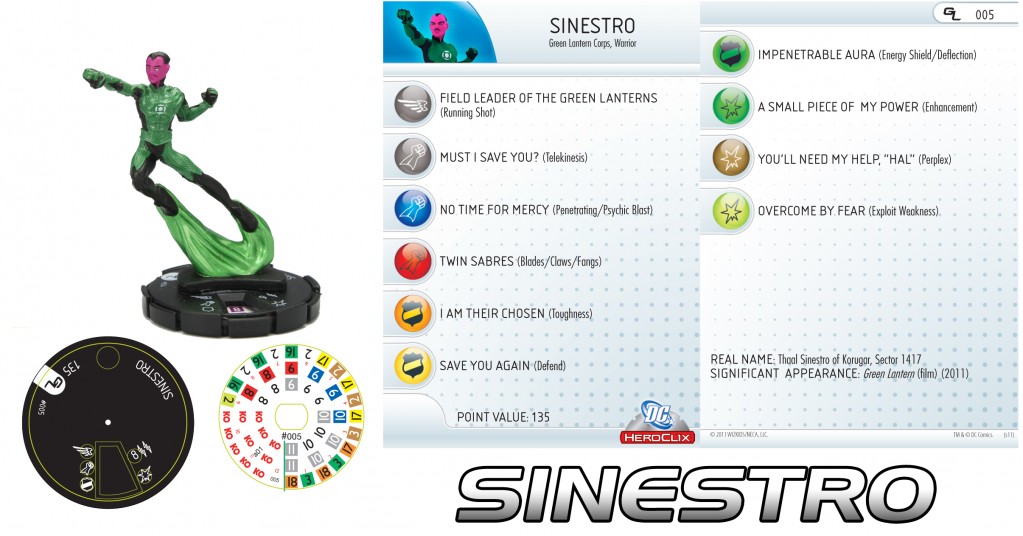 At only 135 points, Sinestro comes to the fight armed with lots of useful tricks resulting from his many years of experience as a Green Lantern.  Sinestro’s opening click Running Shot helps him get in to the fight and manuever where he can do the most good.  However, if the Lantern from Korugar would rather pick his moment more carefully, Sinestro can instead use his Telekinesis to either position an ally or enemy to a better tactical position for your Green Lanterns!

Early-dial Enhancement demonstrates Sinestro’s tutelage and experience being put to good use by other Green Lanterns, and gives way to Perplex as Sinestro takes a more active role in directing the Lanterns’ efforts.  Toughness helps manage some of the damage dealt to Sinestro while mid-dial Defend helps keep those Green Lantern rookies safe!

Late-dial, Sinestro trades in his Defend for Energy Shield/Deflection as he attempts to better protect himself from ranged attacks.  We also see a hint of the Sinestro we’ve all come to know as he picks up more aggressive tactics with Blades/Claws/Fangs and Exploit Weakness.

Next up we have the Green Lantern from Sector 2814.  No we don’t mean Hal Jordan but rather Abin Sur! 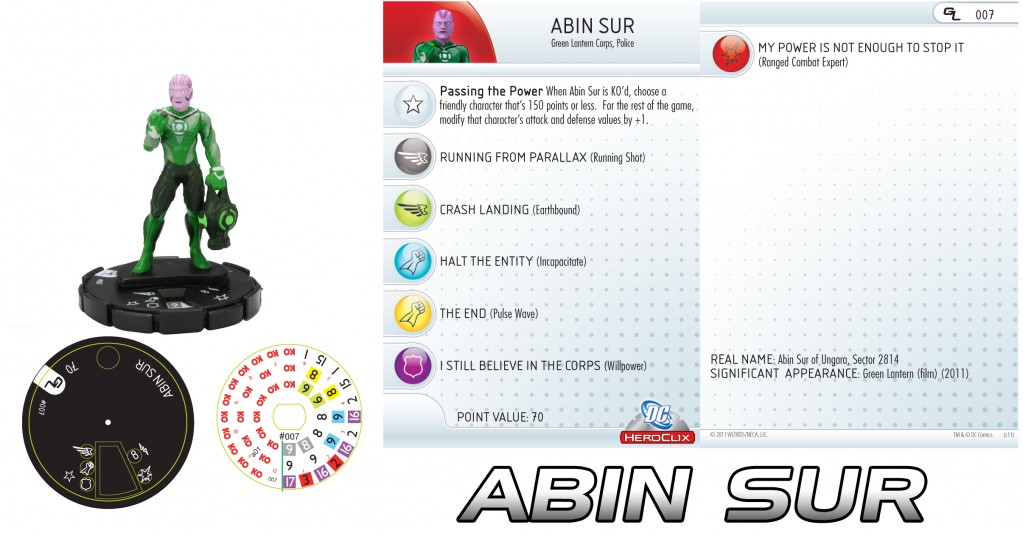 At only 70 points, Abin Sur is a welcome addition to Green Lantern teams.  Early-dial Running Shot and Ranged Combat Expert give Abin all sorts of ranged options as he enters the battle.  No matter what you choose, with his Willpower Abin Sur is able to follow up the next turn with a similar attack or use the other option!

With consistent combat values and a great array of powers, Abin Sur is an incredible asset to many different strategies.

Join us next week as we preview the Green Lantern Fast Forces pack just in time for the release of both Green Lantern products next week on May 18th! Late in the week be sure to stop by as we may be checking in with a certain sentinel of liberty as well!!!