With the 2011 rules in full effect and a change to the Modern Age format just around the corner, the time has also come for a new version of the Player’s Guide!

If you just flip through the pages of the document, you may notice that there is a whole lot of red text in there. A lot of the changes are cosmetic – with the new rules in place, some changes to the text had to be made so the figures can keep working the way they did under the 2010 rules. Changes of this nature includes:

There has also been a general clarification for various versions of Telekinesis that refered to the (now defunct) options, clarifying how they work under the new rules. More importantly, Telekinesis has also been tweaked a little to make things clearer: When making an attack with an object, it is now specified that the attack is made against the opposing character and not the square it occupies. However, line of fire is still drawn to the square, so Stealth on the opposing character does not prevent the attack. Let’s illustrate: 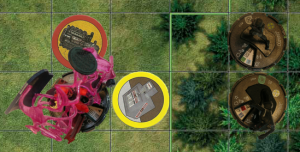 In the picture above, Magneto is in position to show the girls of the X-force why he is the Master of Magnetism. By drawing line of fire to the squares instead of the figures, Magneto bypasses their Stealth. However, he is still targeting them with a ranged attack, so Wolfsbane still gets to roll Shape Change and Super Senses to try to avoid his attack, and Domino gets a defensive boost from her Energy Shield/Deflection. 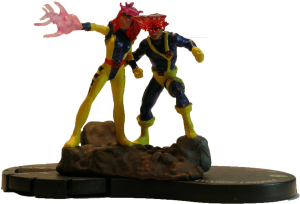 Going down to the specific character level, there are two changes of previous rulings that stand out: Cyclops/Phoenix are no longer required to be able to use both Force Blast and Telekinesis to use their Slym and Redd power, since they can now be given “up to” two free actions to use these powers. If you want to just use Telekinesis to move one of your figures into position, go right ahead. 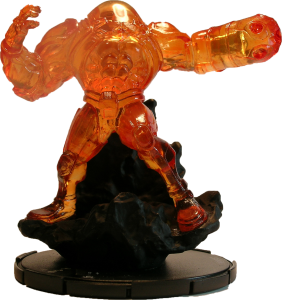 The other change is to Nemesis – by changing his Bio-Nuclear Blast to a non-targetting ranged combat attack, he can now use it to activate his Life Energy Drain trait, making him more lethal than ever! Since this attack neither draws line of fire nor targets, it is a great way to bypass Stealth and Shape Change, but at least Energy Shield/Deflection and Super Senses may allow an opposing figure to avoid the blast.

A reversal of a previous ruling is that damage taken now is considered the number of times you click the dial – anything that keeps the dial from clicking (like the White Lantern Live! special power) also affects the damage taken. This affects things like Bombastic Bag-man’s Kick Me trait as well as things like Sabretooth’s Mortal Wound special power.

One final note to make is that there has been a lot of work to eliminate redundant entries, as there have been a lot of complaints about the Player’s Guide being too long. While a lot of entries have been eliminated, they should not be considered incorrect, just unnecessary as the main rules already cover the issue. One such change is a general clarification about flight stands – by making it a general rule that flight stands do not grant the wing speed symbol, we have been able to eliminate several old entries.

At the bottom of this article you will find the usual Golden and Modern Age versions of the guide. As we’ve done previously, the file is marked up so that you can see the changes that have been made since the last version. If you’d prefer to have a “clean” copy, the Downloads page will have both Player’s Guides without the markings.

Enjoy your games, and feel free to e-mail heroclixrules@gmail.com with any questions you have!