From Super-Soldier to Secret Avenger!

In March of 1941, Joe Simon and Jack Kirby created one of the most influential and well-recognized characters in comic book history.  Now, over 70 years later Captain America has not only helped save the world many times over but he’s received a long overdue promotion and is now commander of not one, but two Avengers teams.  That’s right, America! We’re talking about none other than Steve Rogers, Super-Soldier! 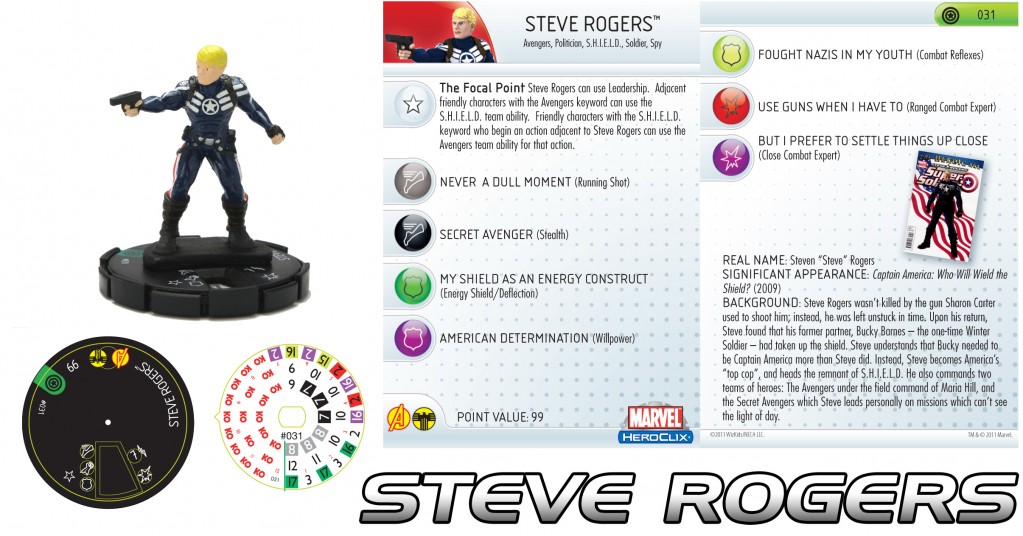 At 99 points, Steve Rogers is a powerhouse addition to your force! Always the first to leap into danger, Steve Rogers manuevers into position with early-dial Running Shot, while Energy Shield/Deflection helps protect him from ranged retaliation.

Mid-dial, Steve Rogers changes tactics and utilizes subterfuge to accomplish his tasks with Stealth.  Striking from the shadows, Steve Rogers attacks with Ranged Combat Expert and with a healthy dose of Willpower, he can act two turns in a row without fear of pushing damage!  Toward the end of his dial, Steve Rogers picks up Combat Reflexes and Close Combat Expert as he demonstrates his decades of martial experience.

With a full dial of Leadership, Steve Rogers is perfect to lead your force into battle, but that’s not all! Friendly figures with the S.H.I.E.L.D. and Avengers keywords get an additional bonus when adjacent to Steve Rogers, befitting his new status as Commander in both organizations.

With consistent and aggressive combat values, a host of very useful powers, a versatile Keyword selection, his incredible The Focal Point trait, as well as two great Team Abilities,  Steve Rogers will be an excellent leader for any team!

We hope you’ve enjoyed our first preview from the upcoming Marvel HeroClix release, Captain America! Be sure to join us next week as we check in with a long awaited Avenger with a penchant for surprising victories! Until then, keep your figures off their K.O. clix!