Today’s preview brings us to the shadowy halls of the sinister organization, A.I.M. (Advanced Idea Mechanics).  Dedicated to world domination through superior science, A.I.M. has been responsible for arming some of the most nefarious villains in the Marvel Universe.   Occassionally, A.I.M. even goes into the field with their own inventions, or simply unleash them upon the world.  One such invention is the Adaptoid! 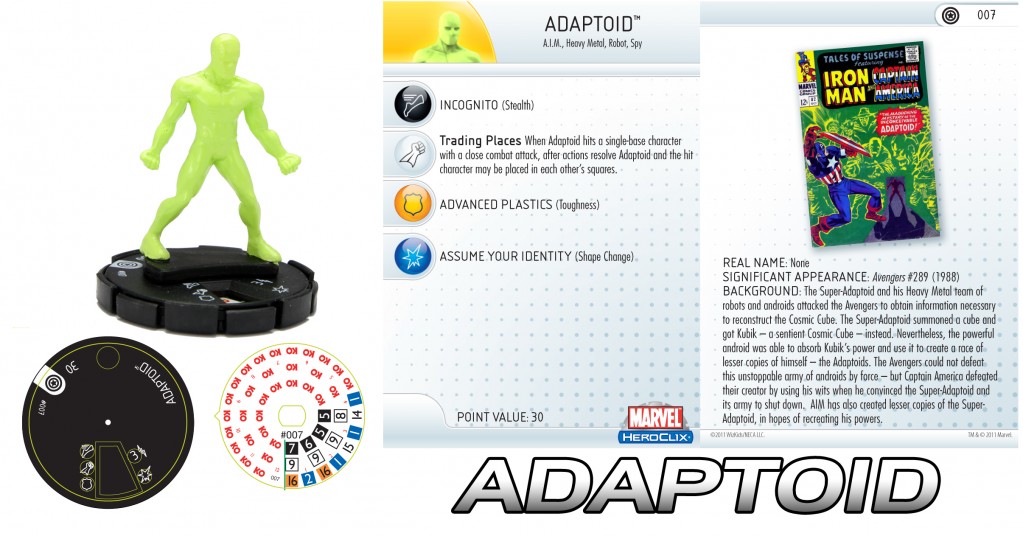 At only 30 points, the Adaptoid is an excellent infiltrator for your force.  Stealth exemplifies the Adaptoid’s penchant to strike form the shadows while the Trading Places special power allows it to do just that with any figure it successfully attacks; switch squares on the map!  Get a few Adaptoids in a line and move your opponent’s figure down the map to your heavy hitter, or use your Adaptoid to switch places with your opponent’s Stealth piece and pull the enemy figure out of the safety of hindering terrain!

The Adaptoid enjoys some protection from damage with Toughness while Shape Change confuses opposing figures as the Adaptoid assumes the appearance of someone they know.

With a consistent dial and a diverse keyword selection, the Adaptoid will be useful for a variety of different team builds and strategies, especially when teamed-up to our next figure: the Super-Adaptoid! 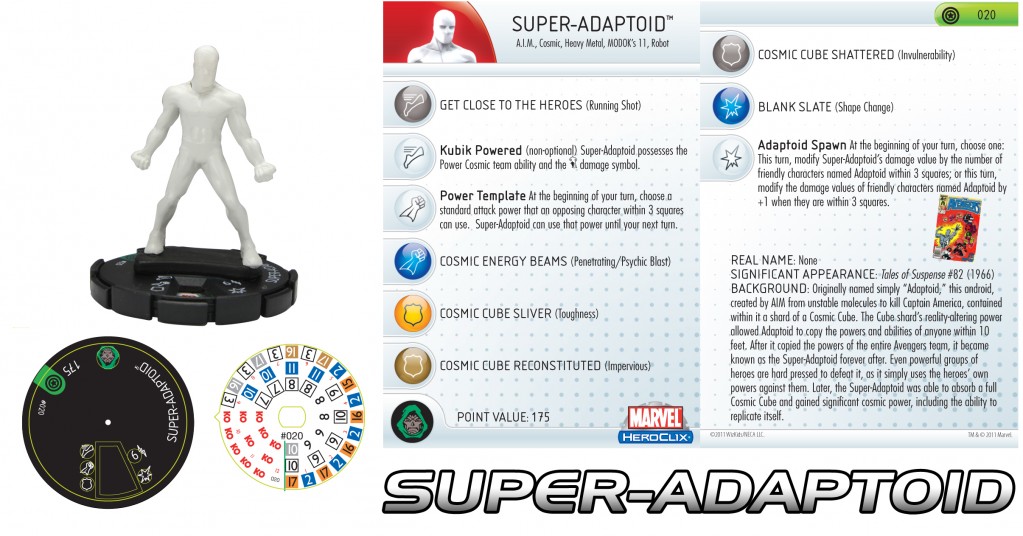 More experienced than its “little brothers”, the Super-Adaptoid is more aggressive in combat preferring to strike at its enemies rather than hide in the shadows.  With early-dial Running Shot, the Super-Adaptoid manuevers into position to get closer to its foes, allowing it to duplicate the standard attack power of any figure within 3 squares with its Power Template special power.  Like the weaker Adpatoids, the Super-Adaptoid utilizes Toughness and Shape Change as its primary defense for the first half of its dial.

That is, until it duplicates the power of an evolved cosmic cube, Kubik!

The Adaptoid and Super-Adaptoid wrap up our previews for this week, but be sure to check in with us next week for an exciting announcement (maybe even two or three!) and even more sneak-peeks from the upcoming Captain America set for Marvel HeroClix.  Be here next week for all the exciting news and brand new characters, it would be a Shame if you missed all the fun!