As we hinted last week, today’s preview features none other than the daughter of the Red Skull himself, Synthia Schmidt, otherwise known as Sin! 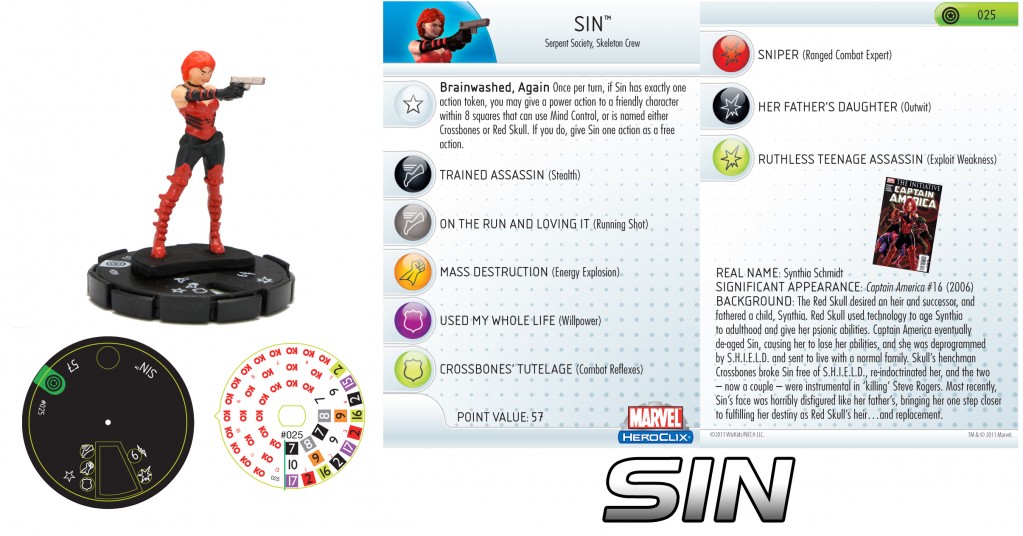 Sin begins the game lurking in the shadows with the very potent combination of Stealth and Ranged Combat Expert.  With only a 6 Range value, you’ll have to manuever close by to your opponents, but Willpower will allow Sin to act without fear of pushing damage, and makes getting into position for that shot a little easier.

Sin moves onto Running Shot with Energy Explosion on her second click, as her more impulsive nature takes control and she leaps into the fray.  Sin enjoys some additionl protection from close combat attacks with Combat Reflexes while Outwit allows her to throw a monkey wrench into the best laid plans of your opponents.   At the end of her dial, Sin picks up Exploit Weakness as she demonstrates the more ruthless tactics she’s learned from her father and Crossbones.

Sin alternates between the two different tactics throughout her dial, switching powers to keep opposing figures on their toes! At only 57 points, Sin has very consistent combat values and a great power selection, but that’s not all! Sin’s Brainwashed, Again trait allows her to pass along her action token when she is within 8 squares of a friendly figure with Mind Control (or the Red Skull or Crossbones) if she has one action token at the start of the action.  Despite her shorter dial, Sin is a great addition to your force as a secondary attacker or ranged harrasser.

That’s all we have for today, but be sure to join us later this week as we check in with the Strategic Hazard Intervention Espionage Logistics Directorate and its one-time controversial former Director.  Until then, keep those figures off their K.O. clix!