A Head Full of Hate!

We could think of no one finer to follow up our “Head of H.A.T.E.” preview article than someone who is literally and truthfully a head full of hate! It is with great pleasure we unveil a special, bonus preview: the  Mental Organism Designed Only for Killing, or M.O.D.O.K.! 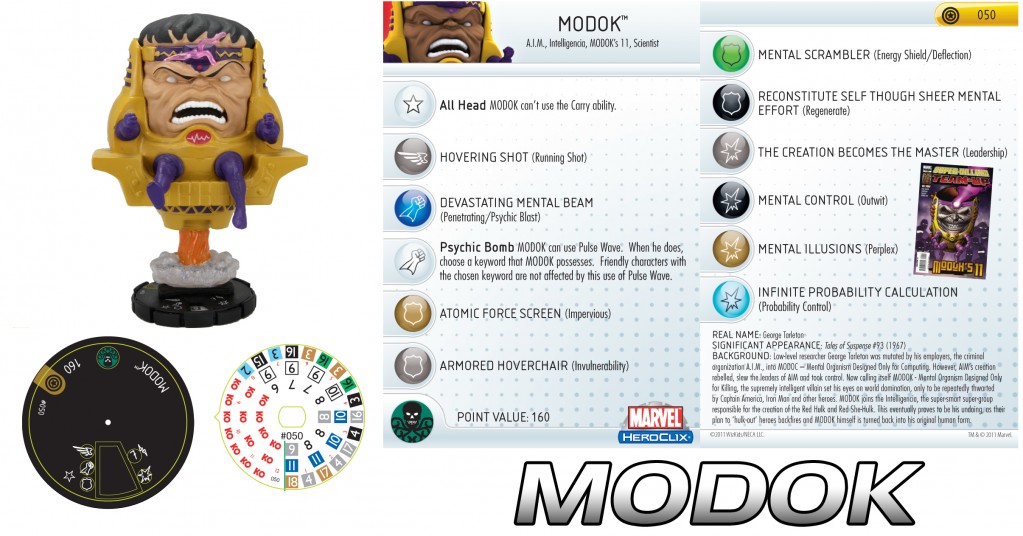 As you can see, M.O.D.O.K. is more than capable of holding his own in a fight!  Wait-what’s that? Who let you in here?!

“Silence FOOL! No one may narrate M.O.D.O.K. but M.O.D.O.K. himself!  I am the pinnacle of scientific achievement! My mental powers are second to none! You shall not have this day puny HeroClixer, and you will rue even trying to limit my awesome might in a mere gamepiece! (Albeit a relatively large and rather handsome one at that)

“As you insignificant, unevolved specimens can see, I am more than a match for many so-called “heroes”.  My specially designed conveyance allows me to use a Hovering Shot (Running Shot)  and target foes at will, while my Devastating Mental Beam (Penetrating/Psychic Blast)  reduces them to ash! And those betrayers in A.I.M. quake at my uncontested might as The Creation Becomes the Master (Leadership)!

“Think you’re formidable? Bah! Fools! My Mental Control (Outwit) will strip you of your vaunted powers or abilities and I will destroy you!

“And don’t even think of trying to harm me, my powers are far too mighty! Do you think you can penetrate my Atomic Force Screen (Impervious) or my Armored Hoverchair (Invulnerability)? Bah! Fools! Nor can you hope to bypass my Mental Scrambler (Energy Shield/Deflection) with your insignificant powers and abilities!

“Should you unevolved thugs attempt to ‘get in close’ in the hopes of avoiding my awesome mental might, I will destroy you all with my Psychic Bombs!  You contemptuous gnats won’t even know what hit you, and you won’t be able to trust your eyes when I unleash my Mental Illusions (Perplex) and manipulate your minds!!! Bwa-ha-ha-ha-ha-ha-ha!!!

“Pfah! In the unlikely event you can pull yourselves together enough to actually damage me, my ability to Reconstitute Self Through Sheer Mental Effort (Regenerate) will mock your every effort! Infinite Probability Calculation (Probability Control) means victory for  M.O.D.O.K.! Yes!

“Yield to the inevitable puny ones! You cannot hope to stand against the daunting mental power of M.O.D.O.K.!!! Destroy! Destroy! DESTROY!!!”