The Face of Evil! 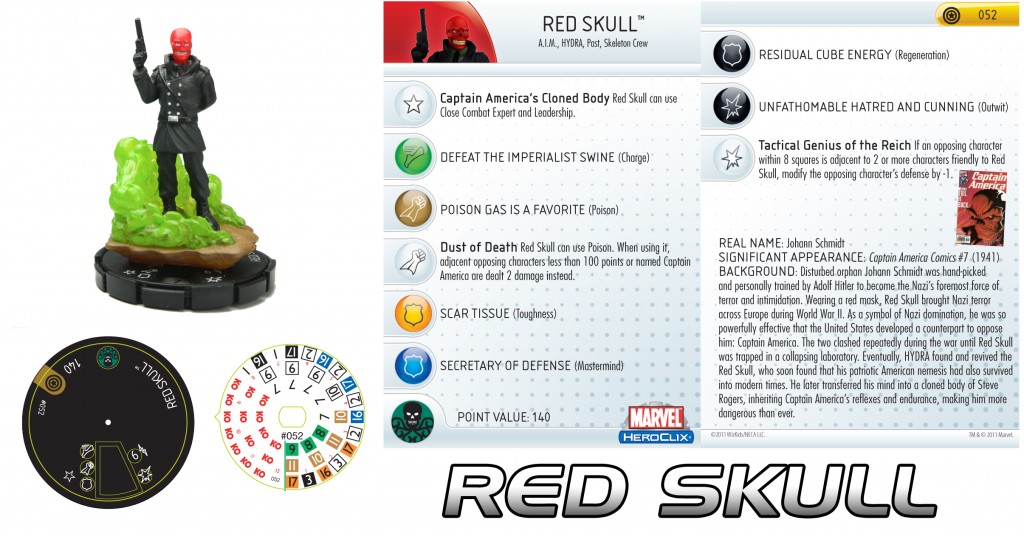 The Red Skull starts with early-dial Charge as he manuevers into position and strikes at your foes! Once he’s in position, the Red Skull’s Poison power continues to damage opposing figures while Outwit allows the Skull to counter just the right powers at the right moment.

Outwit gives way to the Red Skull’s Tactical Genius of the Reich special power which allows him to lower an opposing figure’s defense value by -1 if they’re within 8 squres and adjcent to two or more figures friendly to the Red Skull.

Toughness eventually gives way to Mastermind as the Red Skull displays his penchant for putting others in harms way to promote his evil schemes.  Mid-dial, the Red Skull utilizes his trademarked Dust of Death and uses Poison both normally and when inflicting damage on chracters less than 100 points (or named Captain America!), the Skull’s Dust of Death special power deals 2 damage! Finally, late-dial Regeneration allows the Red Skull to stay in the fight and return to plague Captain America again and again!

We hope you’ve enjoyed this special bonus preview! Join us later this week as we spotlight even more figures from the upcoming HeroClix release, Captain America!