Today’s preview is none other than that most nefarious of villains, a constant foil to the forces of freedom, and an eternal enemy to S.H.I.E.L.D., Baron Strucker! 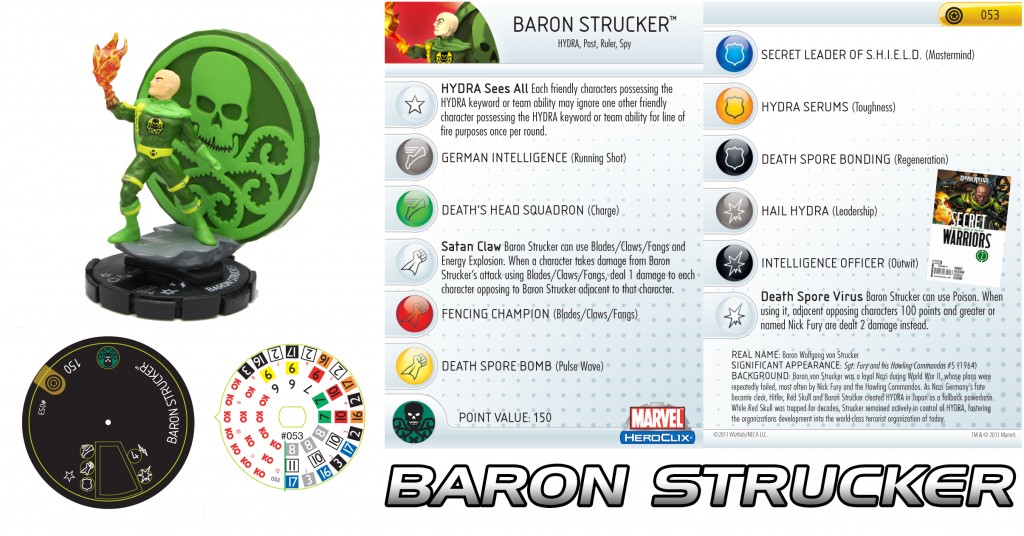 At 150 points, Baron Strucker is well-suited to lead your hordes of Hydra minions into battle! Early-dial Running Shot allows Strucker to aim his attacks from a vantage point of his choosing, while Mastermind and Leadership lets Strucker get the most out of his followers.  Should an opponent be willing to base him, perhaps in the hopes of cutting him off form his troops, Strucker’s Satan Claw special power will make them regret their decision; the Baron will strike his opponent with such force (using Blades/Claws/Fangs) that adjacent friendly figures will feel the effects of the blow as well! An additional benefit is that the Satan Claw special power also allows the use of Energy Explosion, giving Strucker excellent close and ranged combat options.

Late-dial, Strucker’s evil resources are demonstrated by his Death Spore Virus special power, which llows the use of Poison but with a twist! Adjacent opposing figures with a point value of 100 or more (or figures named Nick Fury!) take two clicks of damage instead of the standard one! Strucker’s late-dial also allows him to heal back up to his potent mid-dial with Regenerate, or you can simply Pulse Wave your opponents to death!

Baron Strucker is every bit the master manipulator and able warrior, and this figure is no exception.  Lead your Hydra forces to victory and trod over the remains of S.H.I.E.L.D. with the Baron at the forefront of your hordes! HAIL HYDRA!

We hope you’ve enjoyed this sneak-peek into the upcoming Captain America set for Marvel HeroClix.  Join us Friday as we check in with the mysterious true puppet master of Hydra! Until then, keep your figures off their K.O. clix!