Quarriors – Rise of the Demons! 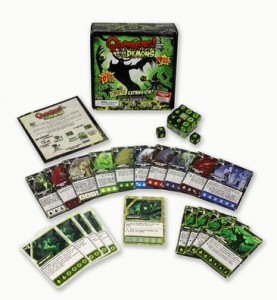 Rise of the Demons is the first expansion to the smash hit, one of a kind, totally innovative and highly regarded Quarriors Dice Building Game. This expansion contains 20(!) all new Custom Dice and 19 new Power Cards, adding a new (icky) layer of strategy and fun to your favorite game of hexahedron monster combat.

Rise of the Demons “brings the corruption” with three new Corrupted dice types, as well as a new “Corrupted” version for each of the 10 classic Quarriors Creatures! All of these Corrupted elements are designed to interact and spread the corruption throughout your opponents’ resources! Laugh with maniacal glee as your Corrupted Creatures infect your foes with Corrupted Quiddity and more!And that’s not all!

With great corruption comes a greater ability to share the pain from afar! All of the dice in the Quarriors: Rise of the Demons expansion feature even larger and easier-to-read numbers and symbols! This way, you can corrupt your foes, and not have to get too close to them!  ; ) 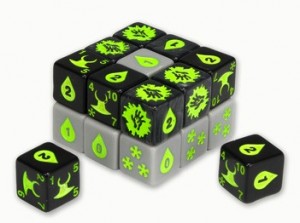 We do have a release update for our Alliance customers: due to an unforeseen shipping issue, Alliance orders will be delayed 1 week.  Quarriors: Rise of the Demons will release November 23rd for Alliance customers.  However, on that day you can choose to flood your opponents’ dice pools with Corrupted Quiddity dice, or embrace the power of the mighty Demonic Overlord and blaze a glorious path to victory