Quarriors comes to the WizKids Event System – and announcing the Quorld Championship Event at GenCon!

Will you be the first Quorld Champion?

WizKids Games is proud to announce the addition of the popular Quarriors! dice-building game as a new event format in the WizKids Event System (WES) .  Stores may now host Quarriors Game Nights for both casual play and for organizing their own Quarriors tournaments.

Retailers— schedule events and encourage Quarriors players to meet at your store for some dice-rolling fun!

Players— encourage your local store to register in the WES and schedule Quarriors game nights!

At GenCon 2012, one high roller will be crowned in all their Glory as the first ever Quarriors! Quorld Champion at our premiere Quorld Championship Tournament.  Players will have the opportunity to qualify for the tournament at GenCon and also through local Quorlds Qualifier Tournaments scheduled through the WES.  Stores wishing to run a Quorlds Qualifier are required to purchase a minimum of one (1) copy of the upcoming Quarriors! expansion set Quarmageddon and register their store (if not already registered) in the WES.

As a promotion for the release of the Quarmageddon expansion set, WizKids Games is offering stores a release day Promo card with each copy of Quarmageddon they purchase.  Retailers who purchase a case of Quarmageddon (6 expansion sets per case) will receive an additional 4 Promo cards (for a total of 10 Promo cards) to use as prize support for their Quorld Qualifier tournaments or other in-store play.

Retailers— please speak with your distributor for availability and pricing (offer available while supplies last).  Quorlds Qualifier tournaments can be scheduled from the release of the Quarmageddon expansion set on June 6 through July 15.  Winners of local Quorld Qualifier events will be given seating in an advanced round of the Quorld Championship Tournament (players are responsible for providing their own travel, accommodations and registration to GenCon).

Here is a sneak peek at one of the new Creatures in this expansion set:  The Troll Behemoth.  Spoiler Alert— this Creature stinks…no really, read on: 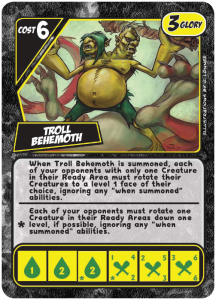 The Troll Behemoth is an offensive monster— and I’m not just talking about his stench!

Through the power of funk, the Troll Behemoth has the innate ability to weaken opposing players Creatures by forcing them to be turned to a lower level die face.  So, if you had a single level 2 Creature in your Ready Area and your opponent summoned a Troll Behemoth, your Creature would now become a teary-eyed Level 1 Creature (and, yes, even Trolls don’t like each other’s brand of mal-odorant).  Roll the Troll Behemoth’s burst ability to get an extra whiff— on its Level 1 face, this forces opponents to rotate one of their readied Creatures dies down even before the Troll is summoned for a potential one-two nostril punch!

This burst ability even appears on one of his Quiddity die faces as a present left behind even when the Troll is not around—try blaming that one on the dog!  And if the sheer smell doesn’t scare you off, you don’t want to be anywhere around when he starts swinging his tree trunk club— boasting attack values of 4, 5 and up to 6 on his highest level.

Do you smell what the Troll is cookin’?