Mischievous Imps are annoying little Creatures who are attracted in droves to feast on magics like a swarm of evil gnats.  It was their mischief that was the cause of the Quarmageddon!  These Imps will be released on June 6— along with 5 other new Creatures and 2 new Spells— in the new Quarriors! expansion set Quarmageddon! 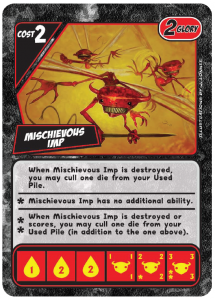 The basic Mischievous Imp gives the ability to cull dice from your Used Pile when they are destroyed and even the ability to cull an additional die if it is summoned on its double burst die face—providing an alternate means of culling dice that is particularly useful if you are playing using the new Optional “Expert Culling” rule found in the updated Quarmageddon rulebook.  Swat one down and more will soon take its place! 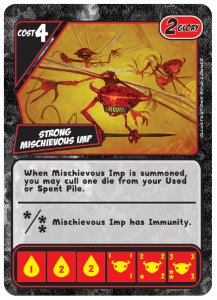 The Strong Mischievous Imp gives players the option of culling a die when it is summoned.  If summoned on its single or double burst die face, these Imps also have the new Immunity ability making them unaffected by the abilities of other Creatures— born of magic and brimstone, these Imps cannot be harmed by mere parlor tricks! 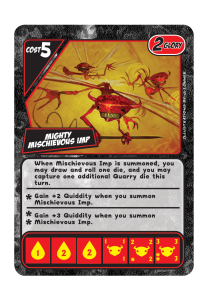 These Imps may be small but their strength is in numbers— the Mighty Mischievous Imp allows players to draw and roll an additional die when summoned as well as allowing players to capture an additional die from the Wilds that turn.  If you are playing with the new Optional “Advanced Capture” rule found in the updated Quarmageddon rulebook (which allows up to two captures per turn) this would mean that you can capture up to three dice that turn!  These Imps even giving you a boost to your available Quiddity when summoned on their single or double burst die faces!

Here is a look at the 2012 Quarmageddon Promo card available through Quarriors! tournament play. 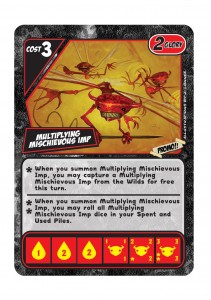 Speak with your local game store about scheduling a Quarriors! event in the WizKids Event System and see if you can capture Multiplying Mischievous Imp for yourself!