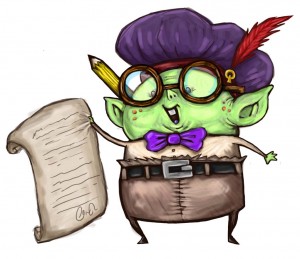 The Quorld Championship Final Round was played using the optional Advanced Capture rule and the Expert Rule of Culling. Additionally, the Glory point goal for the game was set to 20 and the rule of the game ending if 4 Creature Cards were empty was disabled. The final Glory scores were 15, 16, 16, 20. After the game, Jakob described the experience: “It was a very close— at the end it was really anyone’s game.”

In addition to eternal Glory (and the respect and admiration of Empress Quiana herself!), Jakob received a full compliment of all current Quarriors sets (Quarriors Base set, Quaxos Promo Cards, Quarriors: Rise of the Demons expansion set, Quarriors: Quarmageddon expansion set, Multiplying Mischievous Imp Promo Card), a registration voucher for Gen Con 2013, he will receive the upcoming Quest of the Qladiator expansion set and…

Jakob has earned the right to help design his own Creature or Spell card to be included in a future Quarriors expansion set!

Congratulations to Jakob Felts and the other Quarriors Quorld Championship Finalists:

Each finalist received a full compliment of all current Quarriors sets and promo cards.