Overview – The Lord Of The Rings Dice Building Game! 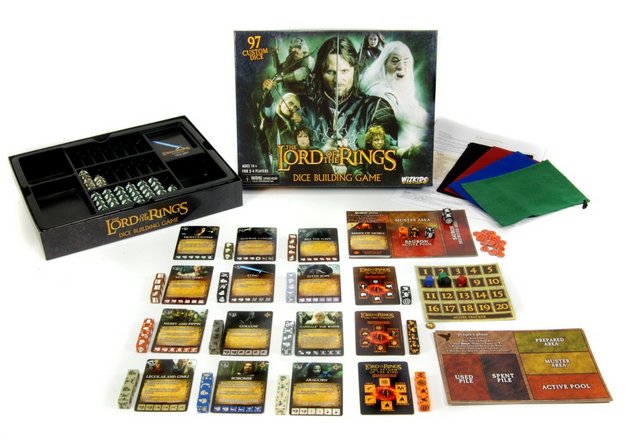 The dice building game engine was pioneered in WizKids Games 2011 release Quarriors! designed by Mike Elliott and Eric M. Lang. Similar to deck building games where players collect a resource to purchase better cards to add to their deck— in a dice building game, players are collecting dice. In The Lord of the Rings Dice Building Game, players must work together to assemble an army of dice representing brave Men, battle-ready Dwarves, wise Elves and stout-hearted Hobbits and muster their troops against the forces of Sauron. But beware — some may be tempted by the power of The One Ring and become corrupted by evil! 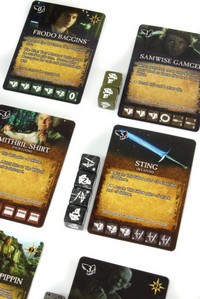 “Fans of Quarriors will readily recognize the dice building mechanic…but The Lord of the Rings Dice Building Game explores a few key elements that make it an entirely new experience out of the box,” said Mike Elliott.

Eric M. Lang described the final design as “very exciting… To be able to use the dice building engine and weave in the rich tapestry of characters, locations, weapons and more that make up the world of Middle-earth was a great challenge. Jeph Stahl and Brett Myers, who worked on the set, did a great job.” 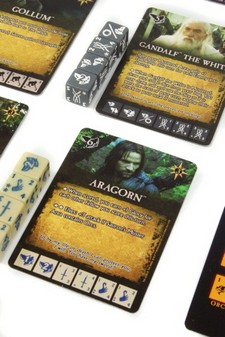 The Lord of the Rings Dice Building Game is a semi-cooperative game—players will work together to defeat the game (or to put it another way—if Sauron wins, everybody loses!). If players defeat the game, the player who has earned the most Glory will be declared the winner.

Players start out in The Shire with only Frodo Baggins and Samwise Gamgee with access to purchasing Bill the Pony. As they approach Rivendell, they encounter their first of Sauron’s forces— represented by Sauron’s Enemies dice. They also meet the Elves who help to equip them with Weapons, Heirlooms and Gifts— four of each are included with the game; one of each type is dealt out randomly each time you play. As the Fellowship strikes out from Rivendell to travel through the Mines of Moria, more of Sauron’s minions rise up to challenge the players but the players also now have access to six characters from The Lord of the Rings trilogy— the 6 character cards are double-sided to provide twelve different playable characters.

After the Mines of Moria, players will fight their way through Helm’s Deep, Pelennor Fields, and past the The Black Gate of Mordor to reach Mount Doom where they have an opportunity to score one last time. At the final location— The Grey Havens— players tally their points for final scoring. 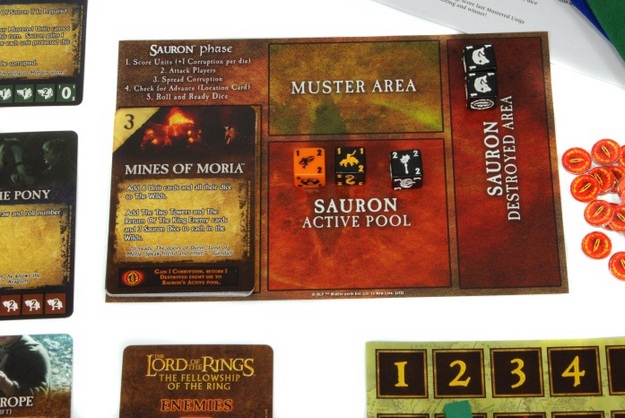 Players alternate taking turns for Sauron and his forces. Sauron’s forces are represented by three sets of “Enemies” dice. Early in the game, players will face the likes of Goblins and Trolls with The Fellowship of the Ring Enemies dice. As players progress in the game, they will encounter tougher foes such as Wargs, Mumakil and Nazgul with The Two Towers Enemies dice & The Return of the King Enemies dice. 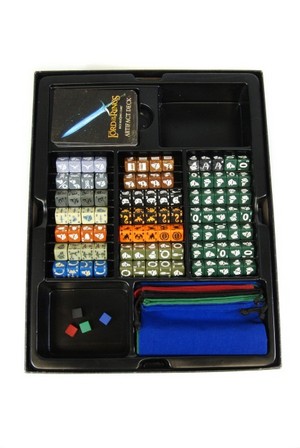 If players are not able to defeat all of Sauron’s forces before his next turn, they may not advance to the next stage and Sauron gains corruption. Corruption is spread onto the cards on the playfield making the dice associated with these cards useless while corrupted. If too many cards are corrupted, Sauron has conquered Middle-earth and all players lose the game.

Most of Sauron’s actions are automated— so the player taking Sauron’s turn is instructed how to resolve Sauron’s attacks and manage his dice. However, players will have to make tough choices when it comes to spreading corruption. Any corruption that is not spent by the player is subtracted from their Glory score. If players are willing to sacrifice their opportunity to buy a die, they may use their Fellowship points to remove corruption from dice.

The Lord of the Rings Dice Building Game is packaged with a box insert that holds all of the cards and dice in an easily visible and accessible manner— making game set up and breakdown simple.

The battle for Middle-earth begins in March 2013! 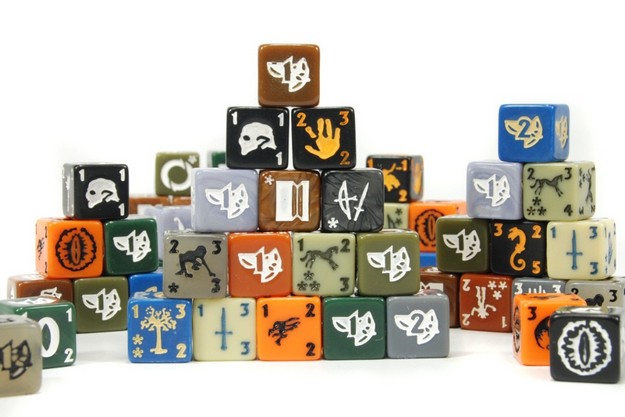