Presenting the first game card wallet of its kind, the WizKids/NECA Yu-Gi-Oh! Game Card Wallet has been designed by players, for players, and is offered exclusively through Kickstarter. 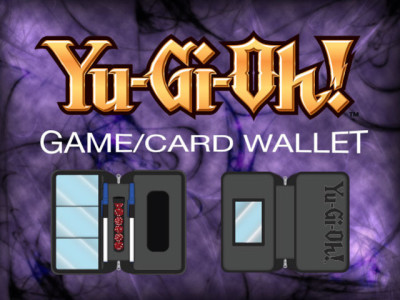 Dependent on a successful Kickstarter project campaign, three limited-edition game card wallets will be delivered, free, to three lucky fans. The special giveaway runs today through October 2 and all that is required to enter is a valid email address. All entrants will receive a unique code that can be shared with friends—each friend who enters using that code will earn the initial entrant an additional entry.

Winners will be randomly selected on or about October 3.

For more details or to enter, visit yugiohgamewallet.com.

4K Media Inc. is a wholly owned subsidiary of Konami Digital Entertainment, Inc., created to manage the Yu-Gi-Oh! franchise outside of Asia. 4K Media is responsible for brand management, licensing, and marketing of Yu-Gi-Oh!, as well as production and distribution of the Yu-Gi-Oh! television series. The Yu-Gi-Oh! animated franchise, with nearly 600 episodes, consists of the original Yu-Gi-Oh!, Yu-Gi-Oh! 5D’s, Yu-Gi-Oh! GX and Yu-Gi-Oh! ZEXAL, has been translated and broadcast in 90 countries on many of the top leading networks.