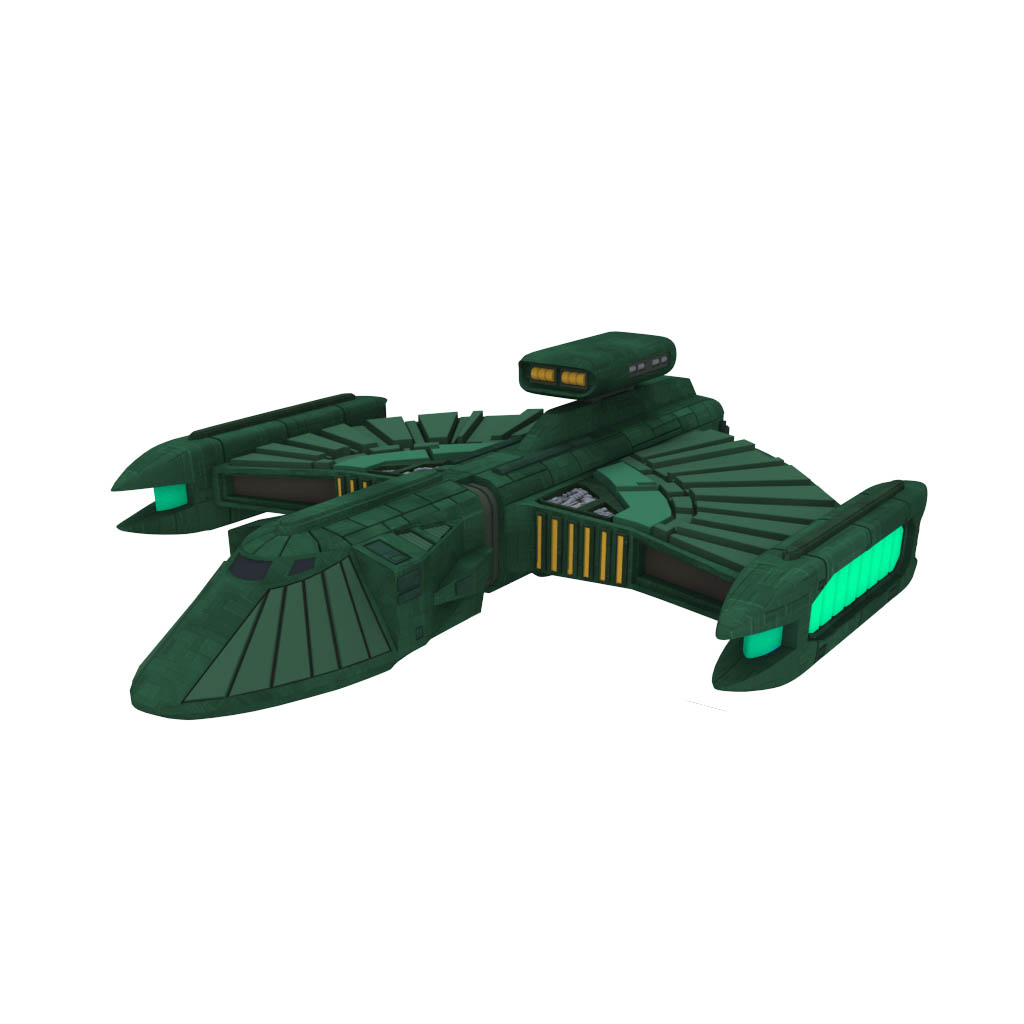 Hey all, is it Wednesday already?  Guess that means you are back to see some information on another Wave 2 Expansion Pack for Star Trek: Attack Wing!  This week we look at a tiny scout ship for those duplicitous Romulans: the R.I.S. Vo.  Keeping with its functional nature, the R.I.S. Vo is not going to be the heavy hitter for the Romulan fleet.  With a sole attack die, its main purpose will be to hamper the opponent by getting in the way and denying actions due to the overlapping of ship bases.  It will be well served in this role with its natural 3 evasion dice (another Attack Wing “first” this wave), coupled with the ability to cloak, as well as the ability to perform an Evasive Maneuver Action as a free action after moving.  All of these items are going to keep this Scout Vessel on the board for a long time even if it is not attacking. With Alidar Jakok captaining the ship, a player has even more assurances of survival as he can discard his Elite Talent a ship at range 1 or 2 to keep the two ships from firing at one another (shouting “Don’t Phase Me, Bro” is completely optional). 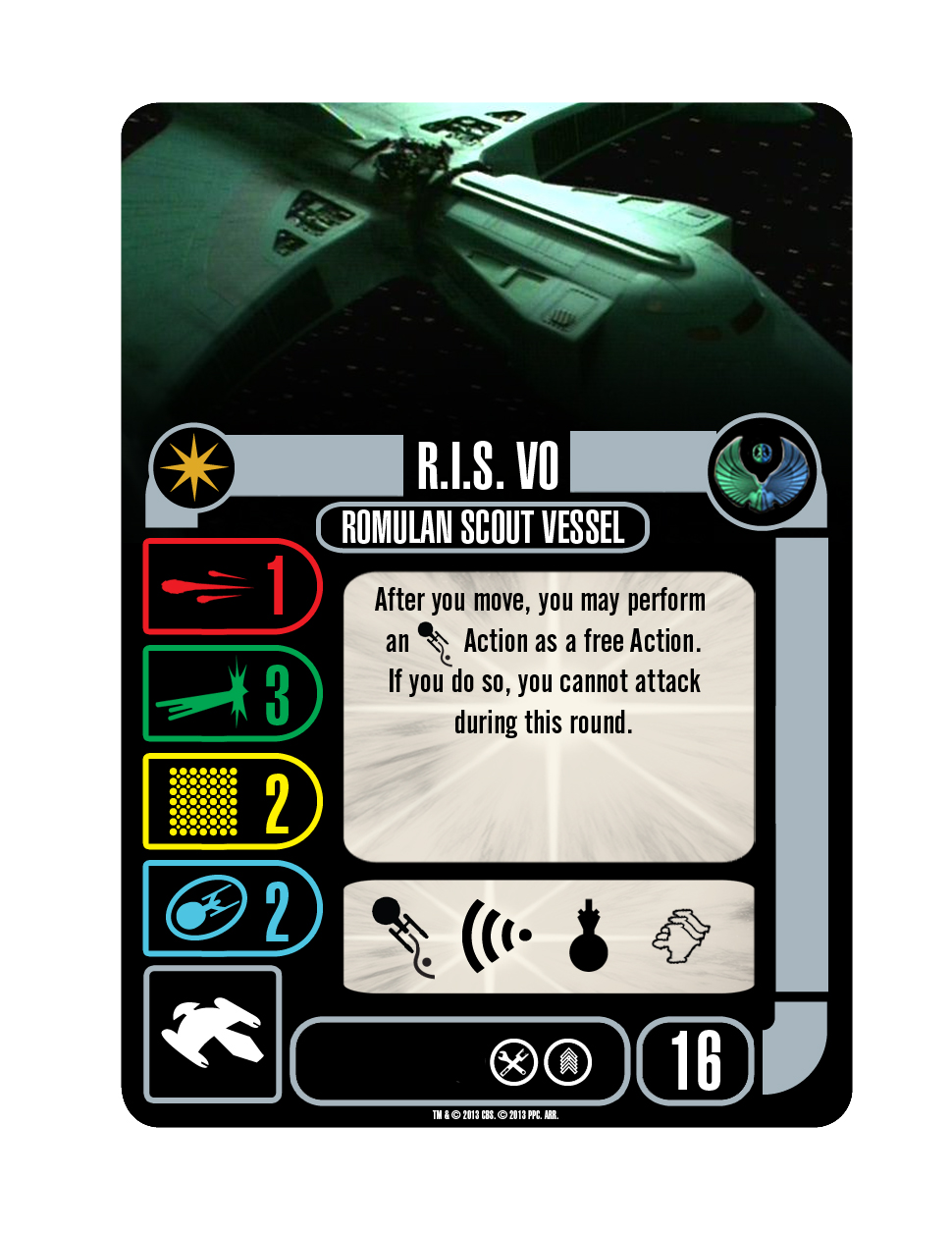 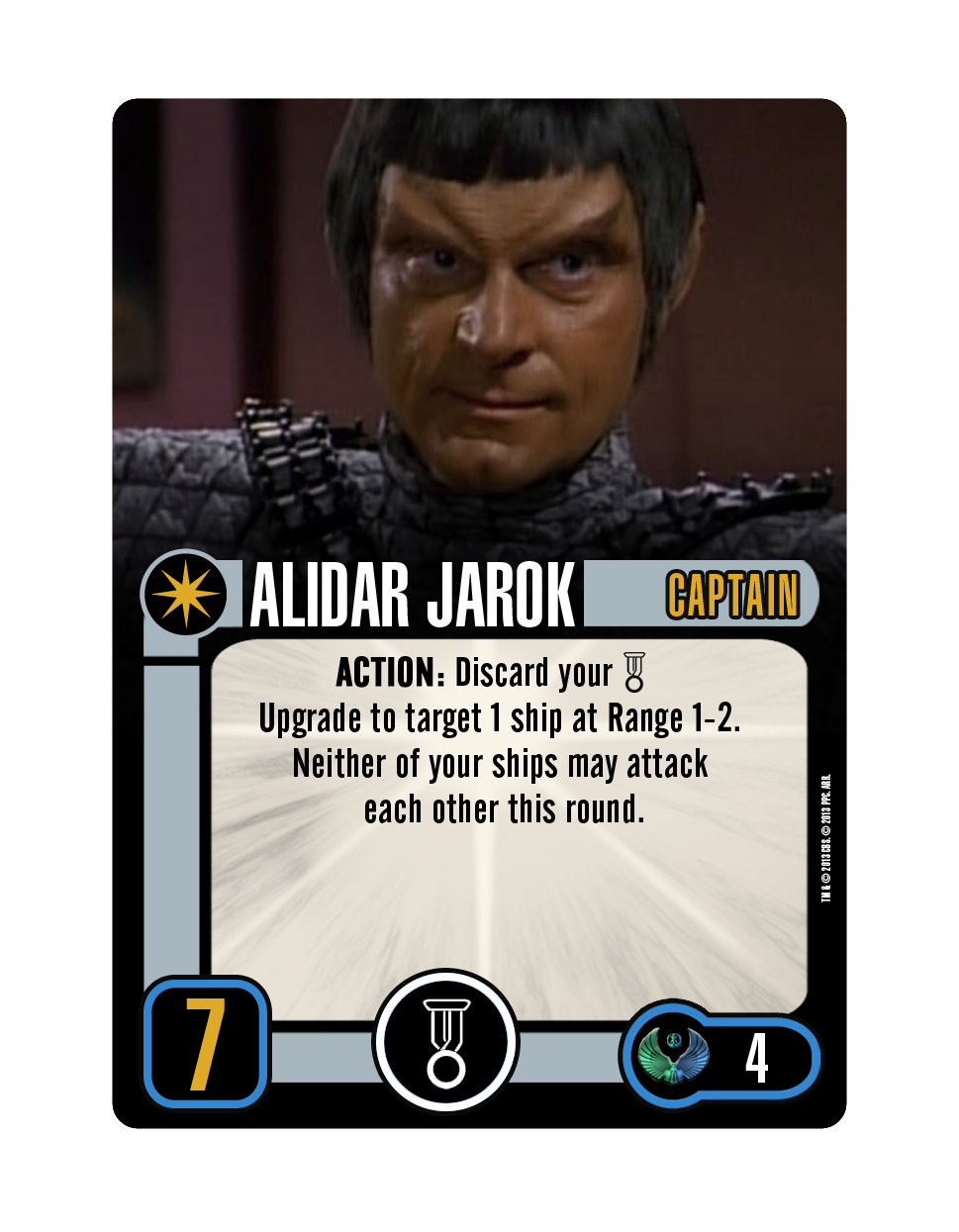 Another defensive boost contained in the Expansion Pack is the unique Selok Crew Upgrade.  She can be discarded as an action and a targeted opponent ship within Rage 1 cannot attack her ship for that round.  Because games are not won on avoiding your enemy’s attacks alone, the R.I.S. Vo also has a few upgrades that will work well on dealing damage to an opponent.  The Tech Upgrade, Ultritium Explosives, can do some serious damage to an opponent.  If your ship is not cloaked, this upgrade can be discarded to lower your shields and then target an uncloaked ship that also has no active shields.  With the additional discard of a Crew Upgrade, a player can then inflict one Critical hit against an opponent’s ship.  With the Romulan faction having several 1 point Crew options, this little surprise would only take 3 points to pull off.  Massacre, the Elite Talent upgrade in the set, can also be coupled with Ultritium Explosives for more devastation due to its ability to add 1 additional damage to the opposing ship. 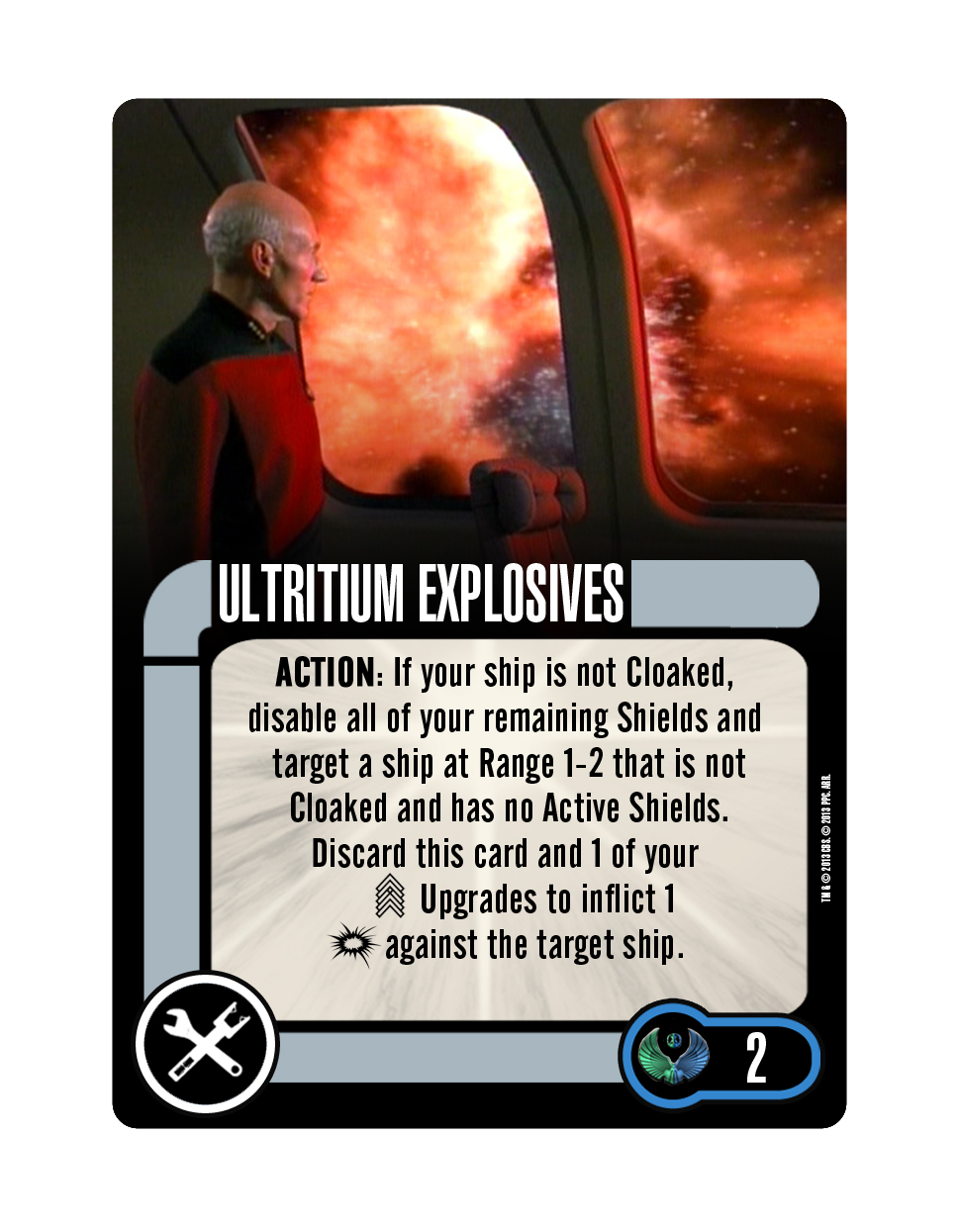 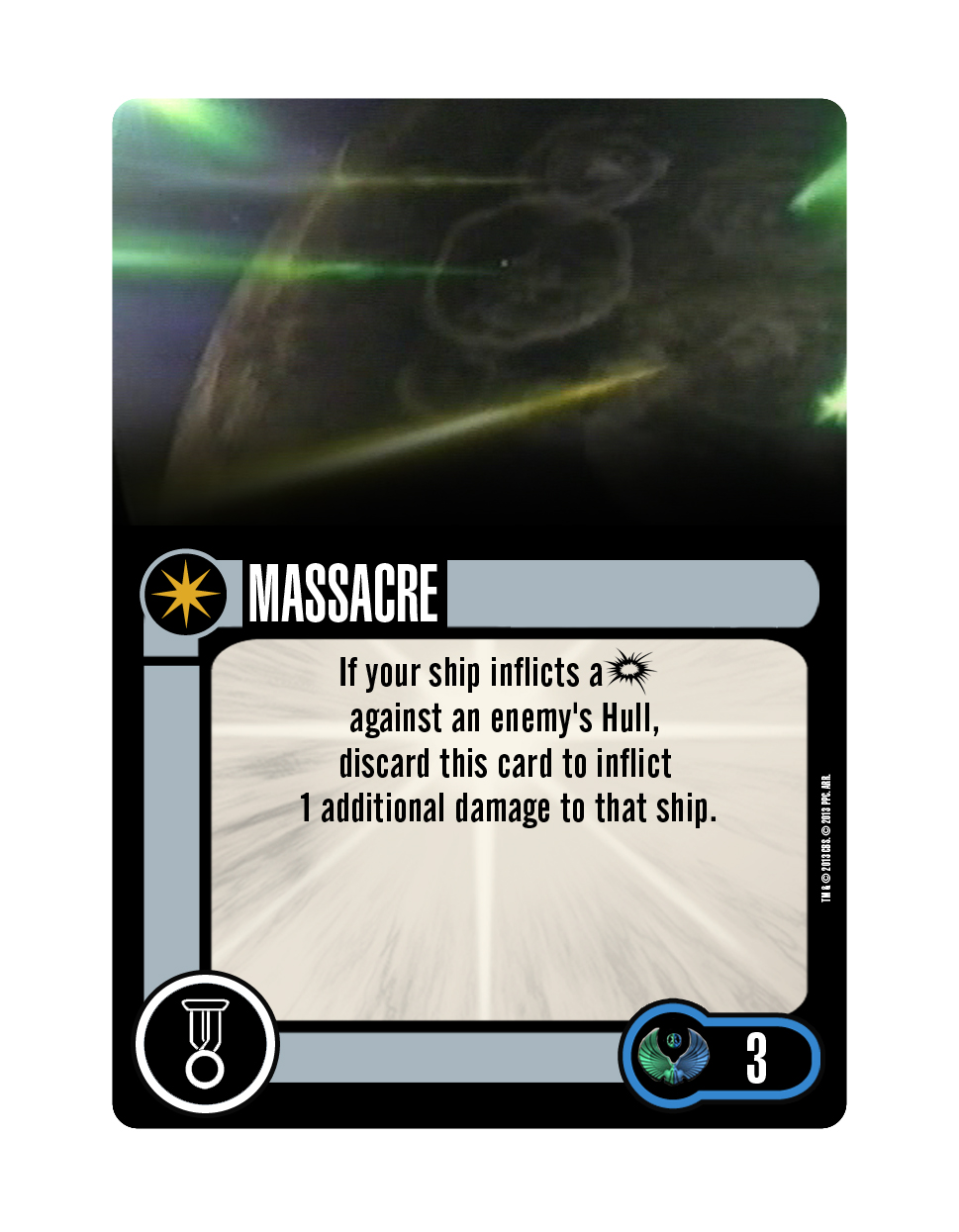 Finally we look at the Mission in the Expansion Pack: The Defector.  Two Romulan players will act out the beginning acts of the TNG episode of the same name.  One player (the Romulan Defector) is trying to reach the safety of an awaiting Federation ship (represented by an objective token) while the other Romulan Empire player is “pursuing” the defector.  Destruction of the Romulan Defector’s ship actually causes the Romulan Empire player to lose so care has to be taken when firing upon the Defector’s ship but a player cannot totally ignore the ship as it gives the Defector a greater chance of victory in the end.

Taking all of this to mind, players can look forward to another weapon in the Romulan’s arsenal to help defeat the Dominion advance (as well as those Federation and Klingon forces that are not completely trustworthy).  With everything needed to play, as well as Effect Tokens to assist as memory aides for players, the R.I.S. Vo Expansion Pack will be a ship to not take too lightly on the battlefield.  Join us again next week as we look at the final expansion for Wave 2: the Federation ship, U.S.S. Excelsior!