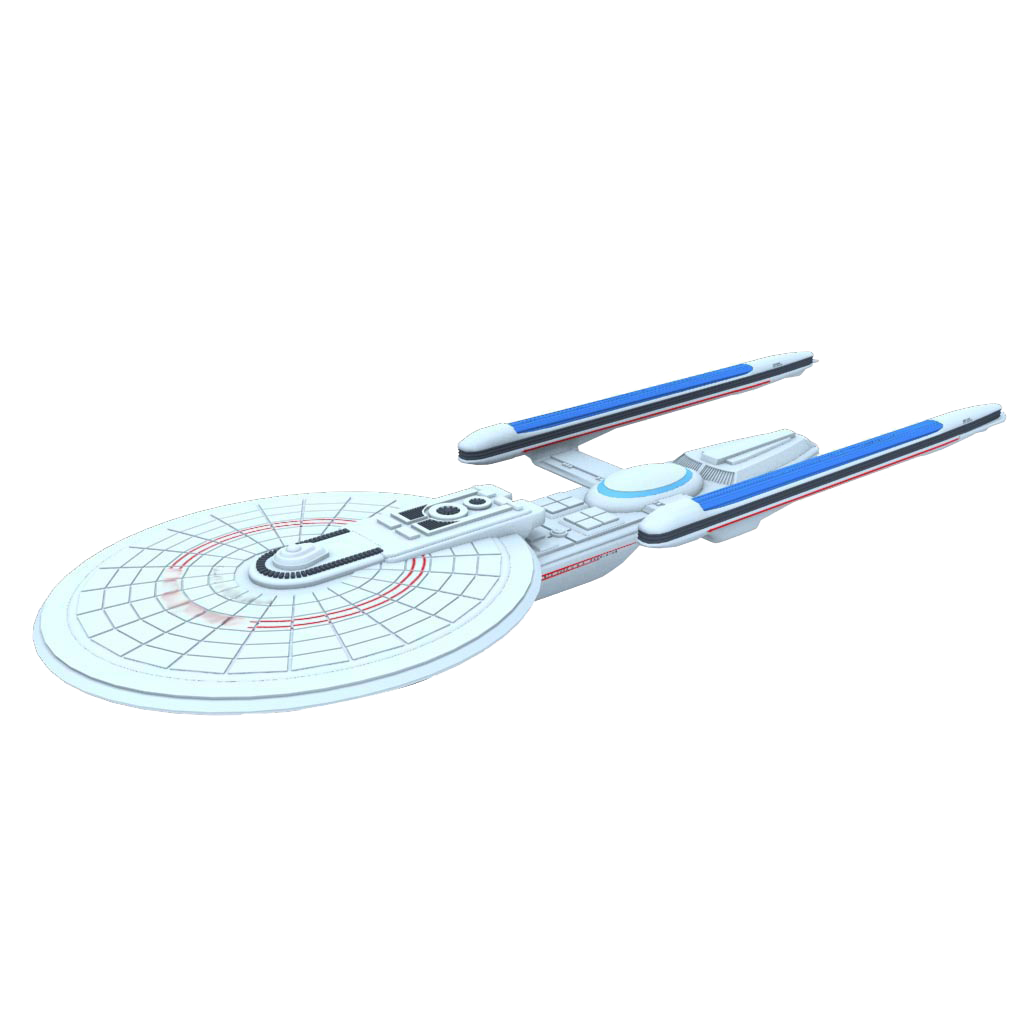 Welcome back, Attack wing fans to the final look at the ships for Star Trek Attack Wing’s Wave 2 release.  Like our last round of previews, we will be looking at a starship featured prominently in Star Trek VI: The Undiscovered Country: The U.S.S Excelsior.  At 26 points, the U.S.S Excelsior is going to be a very capable addition to Federation fleets.  With 5 Hull and 4 Shields, it is well poised to take a hit and still be extremely effective in combat.  Its offensive capabilities (with its great 180 degree forward firing arc) will be greatly enhanced by the ability to perform a Scan action as free action as long as there are no enemy ships within range 1.  Adding to its ability to stay in a fight is Captain Hikaru Sulu who allows you to shake an opponent’s target lock at the cost of disabling a crew upgrade.  Styles also is a great Captain option as he allows you to add an additional Tech slot to his ship.  With many Federation ships missing the ability to use Tech upgrades, he’s sure to see a lot of play outside of this expansion since the named and generic version of the Excelsior Class already have a Tech upgrade slot. 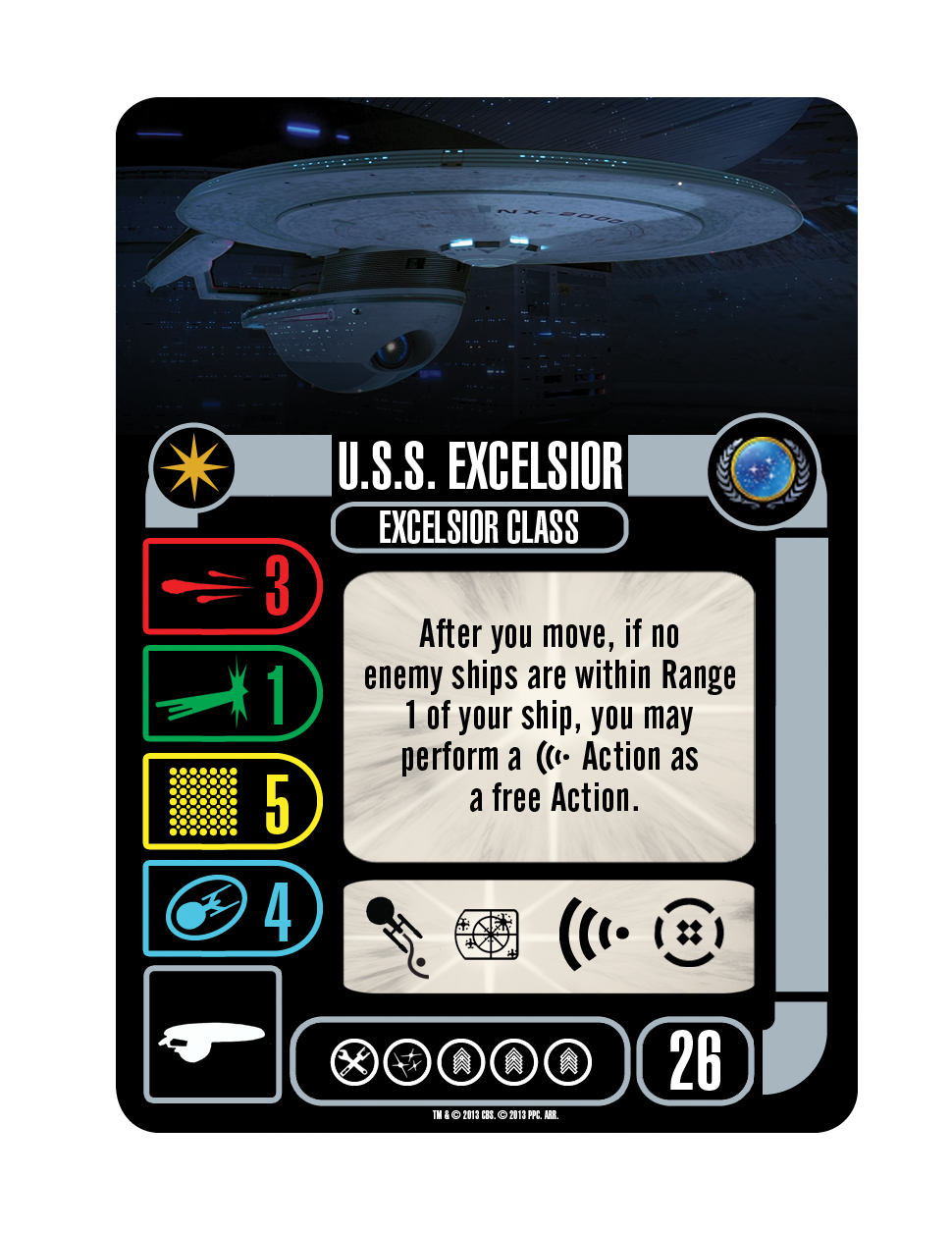 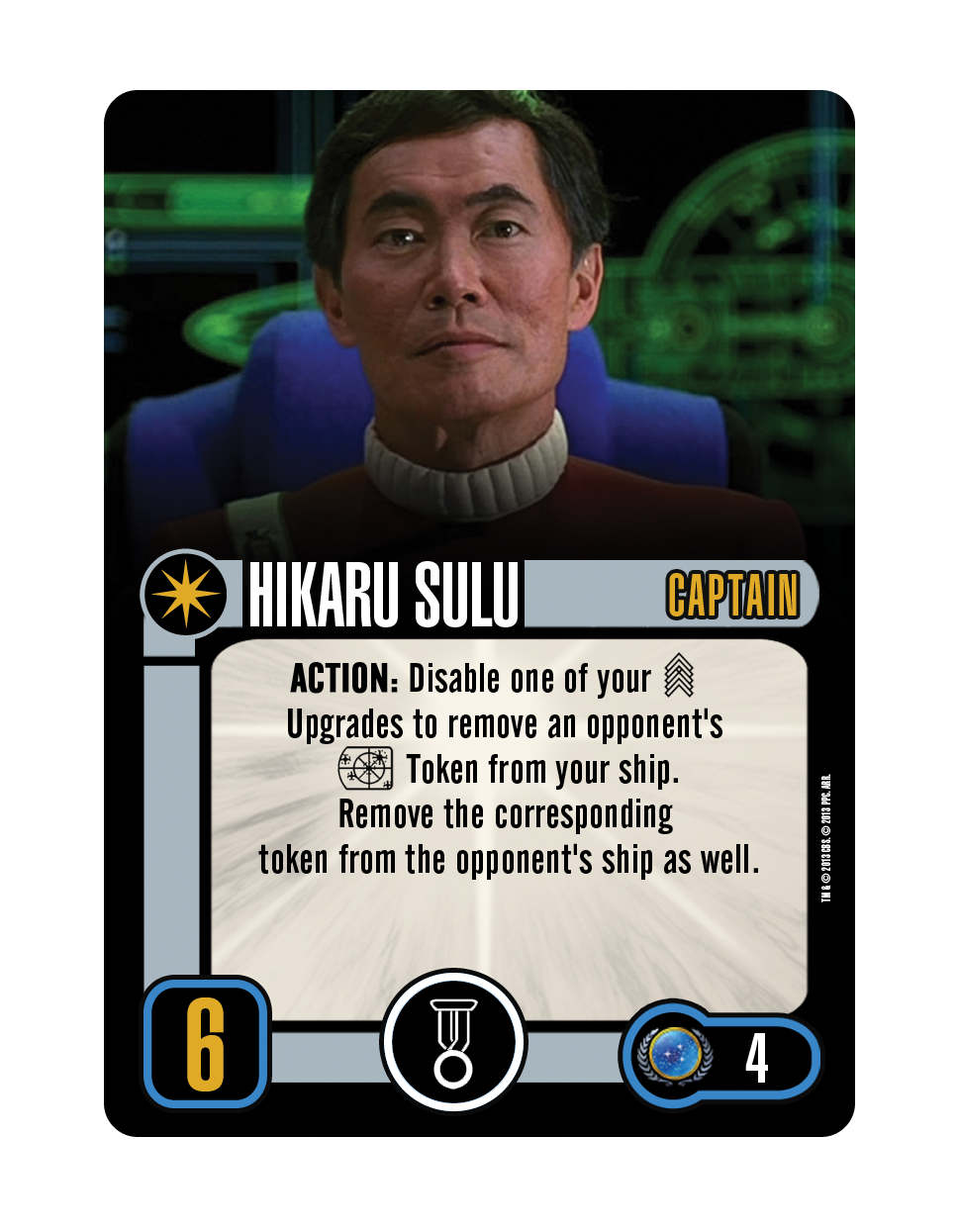 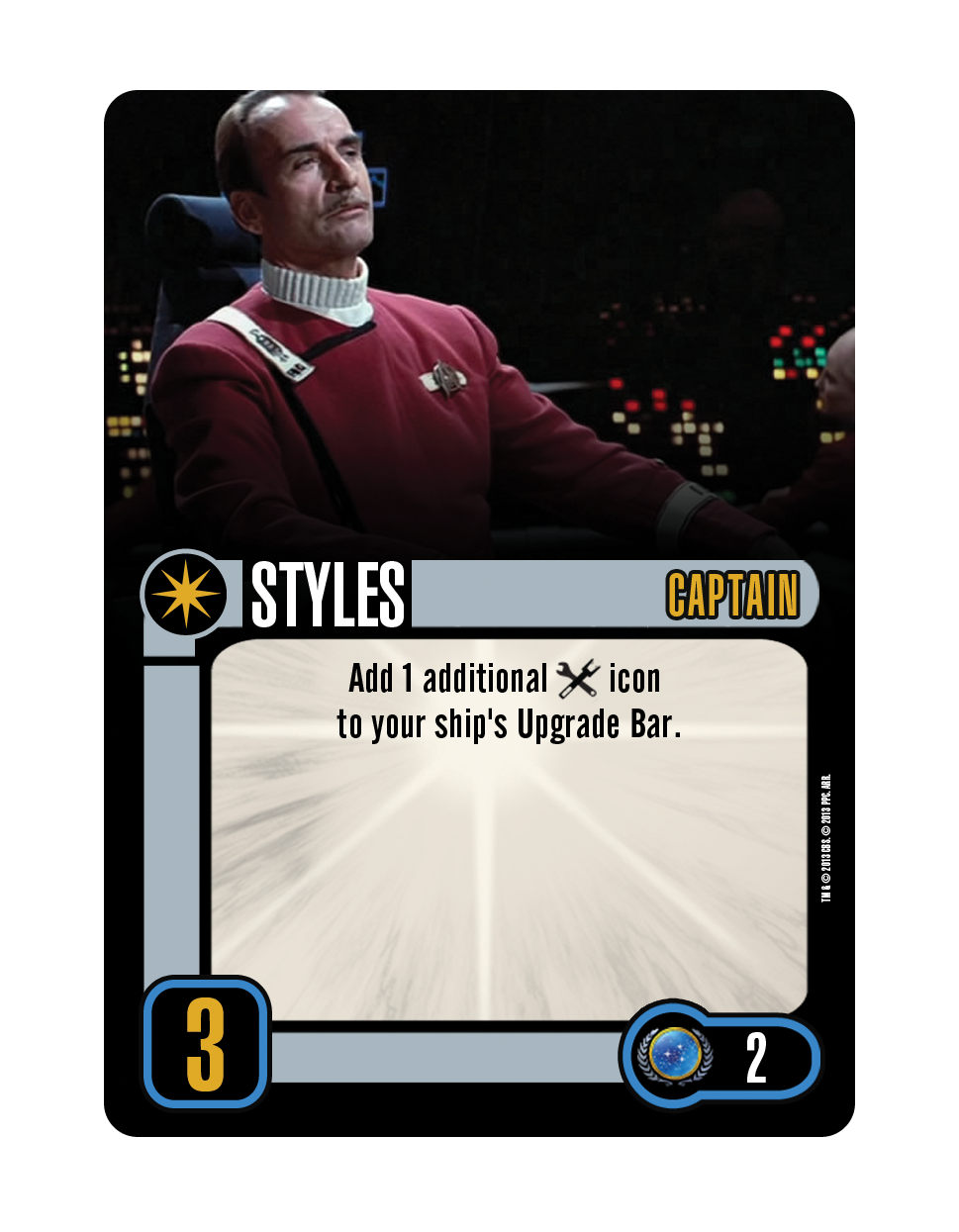 No Federation starship would be able to function well without outstanding crew and the U.S.S. Excelsior Expansion Pack does not disappoint.  Dmitri Valtane allows you to re-roll 2 of your attack dice if there is a Scan token next to your ship so he’s a natural to play thanks to the U.S.S. Excelsior’s special ability.  For those that love to run Weapon Upgrades, the expansion has two cards for your enjoyment: Lojur and Photon Torpedoes.  The Photon Torpedoes are a 4 attack die upgrade that allows you to convert one of your Battle Stations into a Critical Hit.  Lojur will keep you firing more frequently as he can be disabled instead of a Weapon Upgrade that has to be disabled as a part of its function. 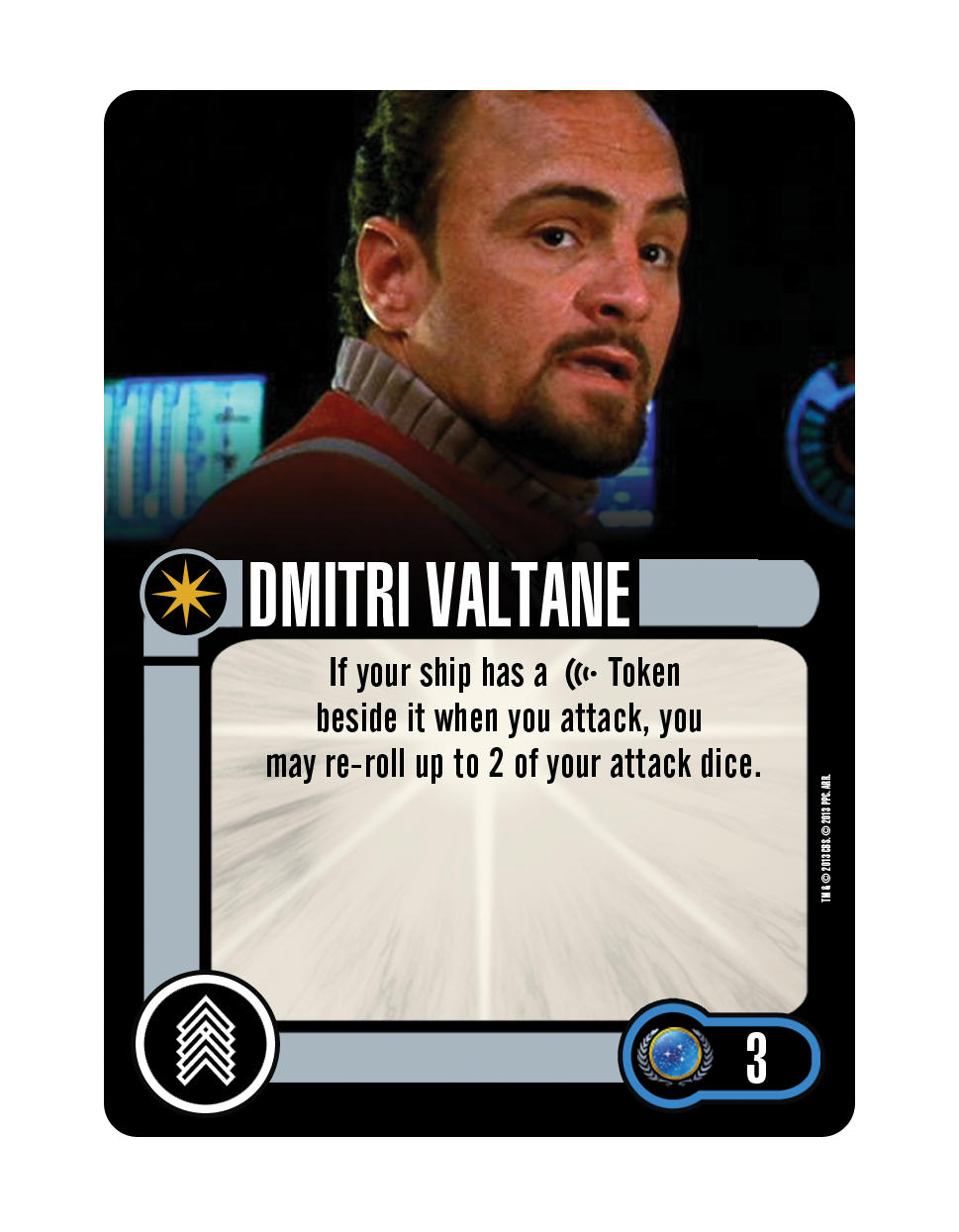 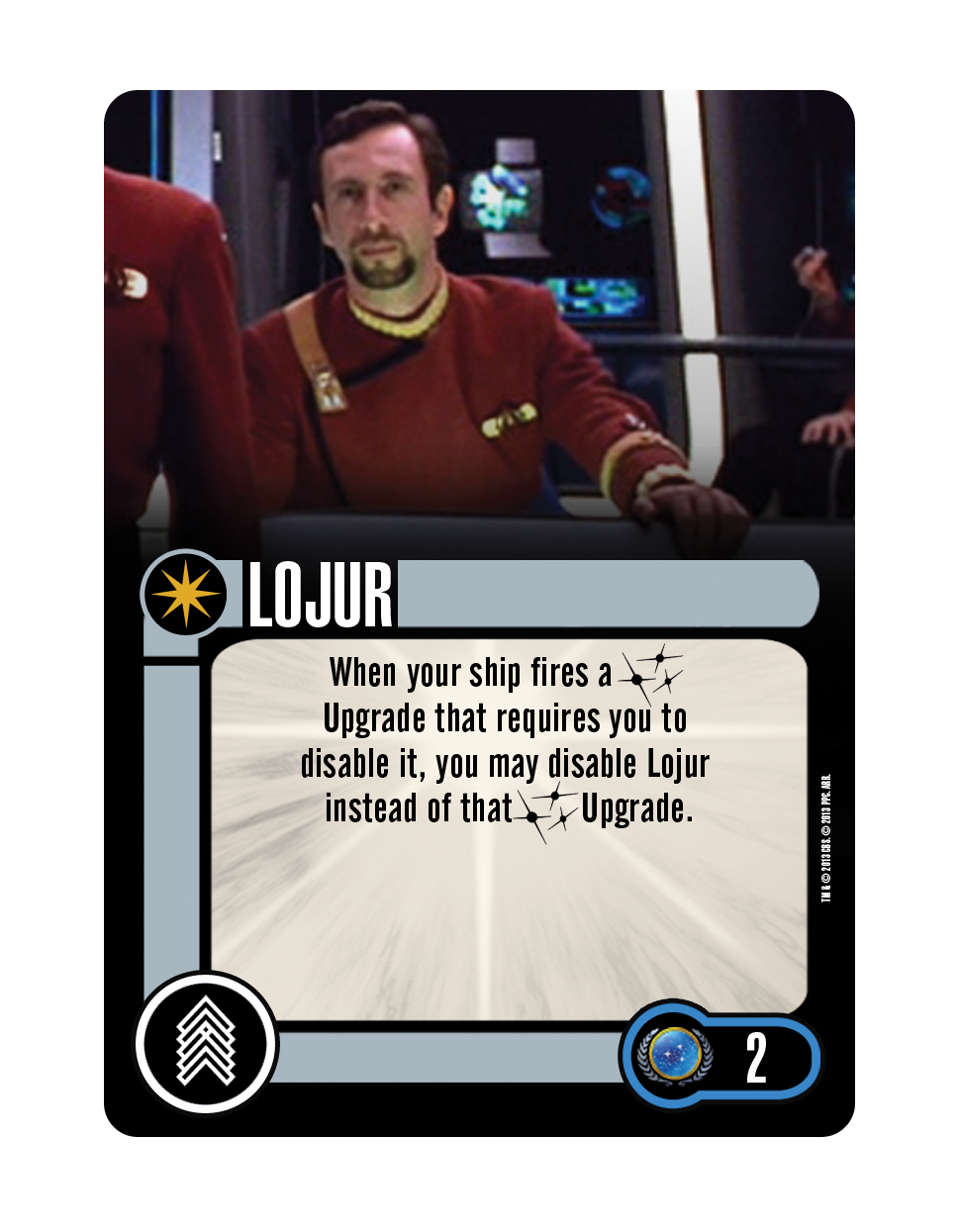 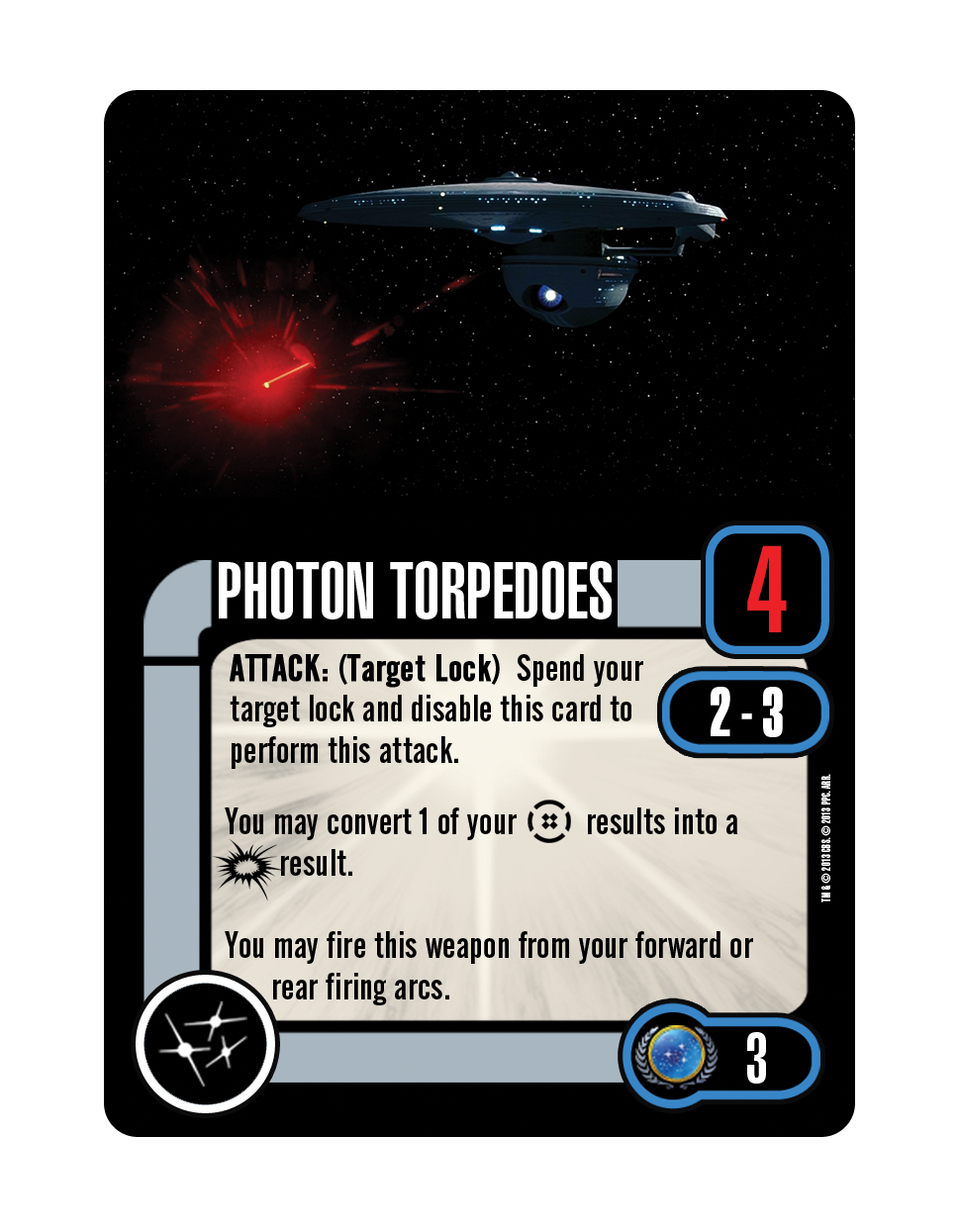 With the Excelsior Class having a Tech Upgrade slot on its Upgrade Bar, the U.S.S. Excelsior Expansion Pack would be remiss if it did not provide some Tech Upgrades as well.  Fans will get great use out of the Positron Beam can be discarded to place an Auxiliary Power token on a target ship within Range 1.When they really need to put some distance between themselves and an opponent or get into the fight quicker, they will want to turn to the Transwarp Drive which will allow the ship to use the straight ahead 6 movement template.  That kind of movement will come in handy while attempting to complete the Operation Retrieve mission included in the expansion. 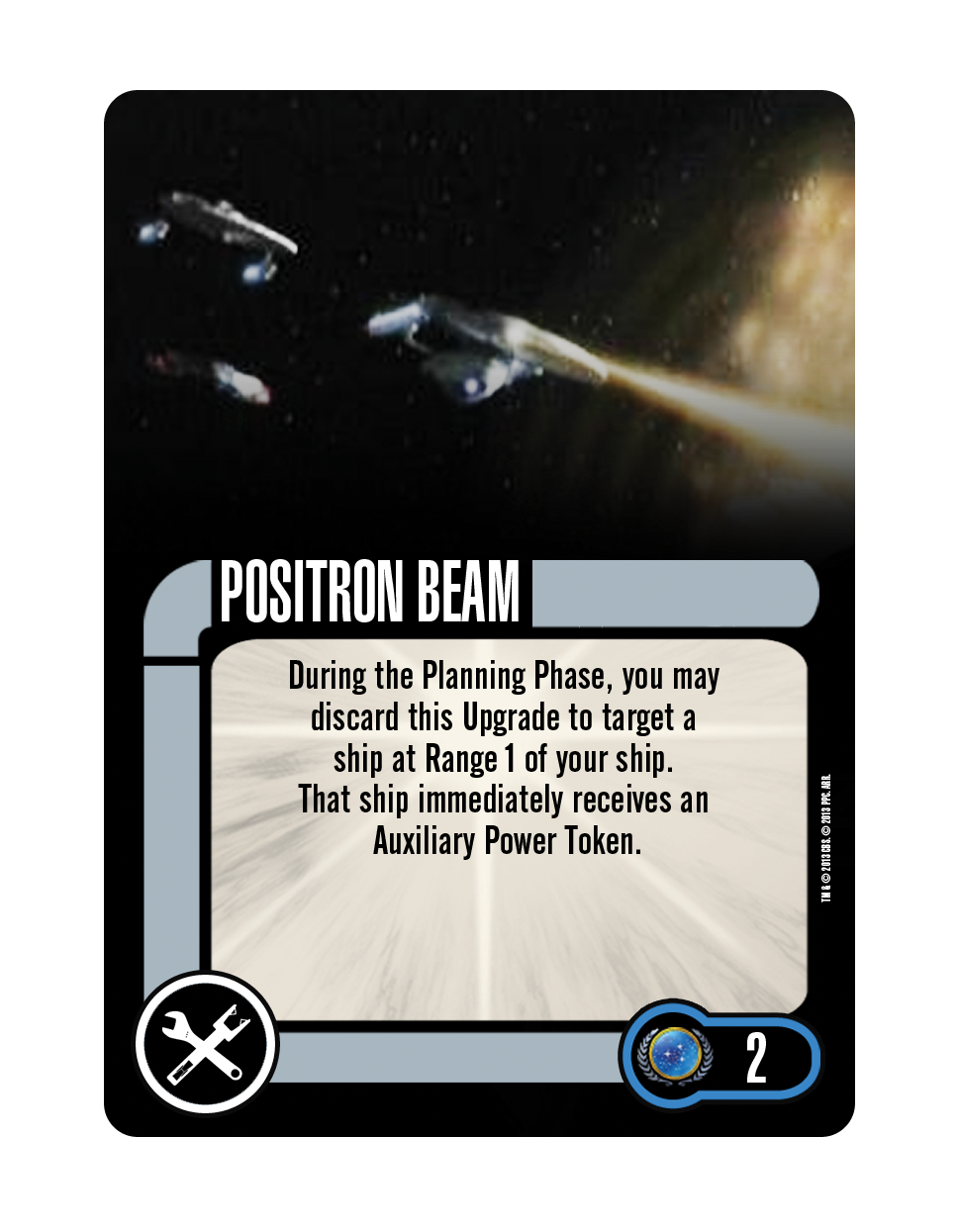 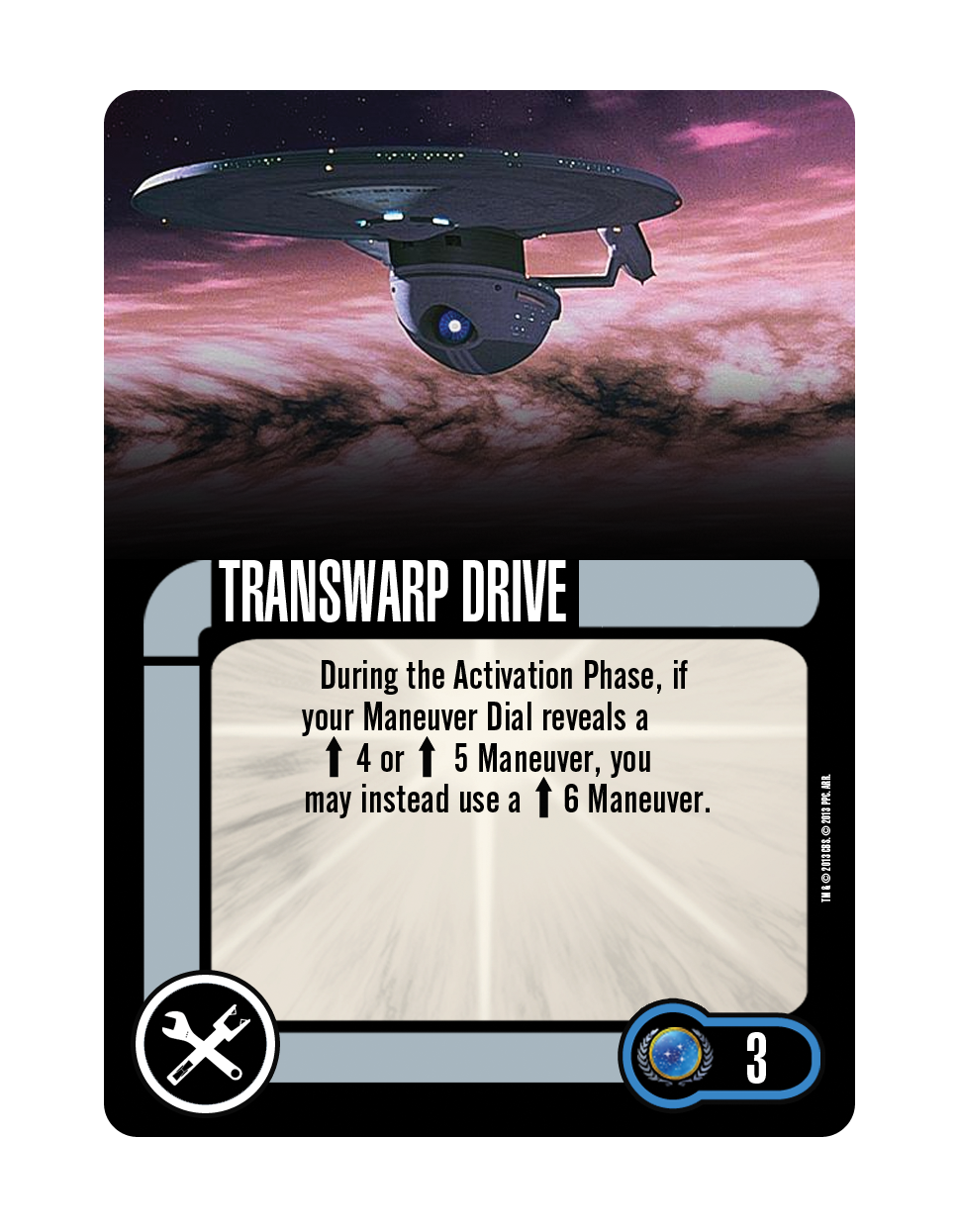 Finally, the expansion contains a Crew Upgrade and Elite Talent Upgrade that were made for each other: Janice Rand and Feint.   Former-Yeoman Janice Rand is ready to help out her captain by being discarded to allow your captain to perform the action on one of his Elite Talent Upgrades as a free action.  Feint allows a player to discard the upgrade and then target an opposing ship at range 2-3.  That ship will roll two less defensive dice if attacked by this ship this round.  By causing the Elite Talent to be used as a free action, this allows the ship to still perform a regular action to help out the attack potential even more.  Or perhaps you want to use Janice Rand to allow James T. Kirk to perform his legendary Corbomite Maneuver while saving your action to activate Montgomery Scott to repair a shield token so you can stay in the fight even longer. 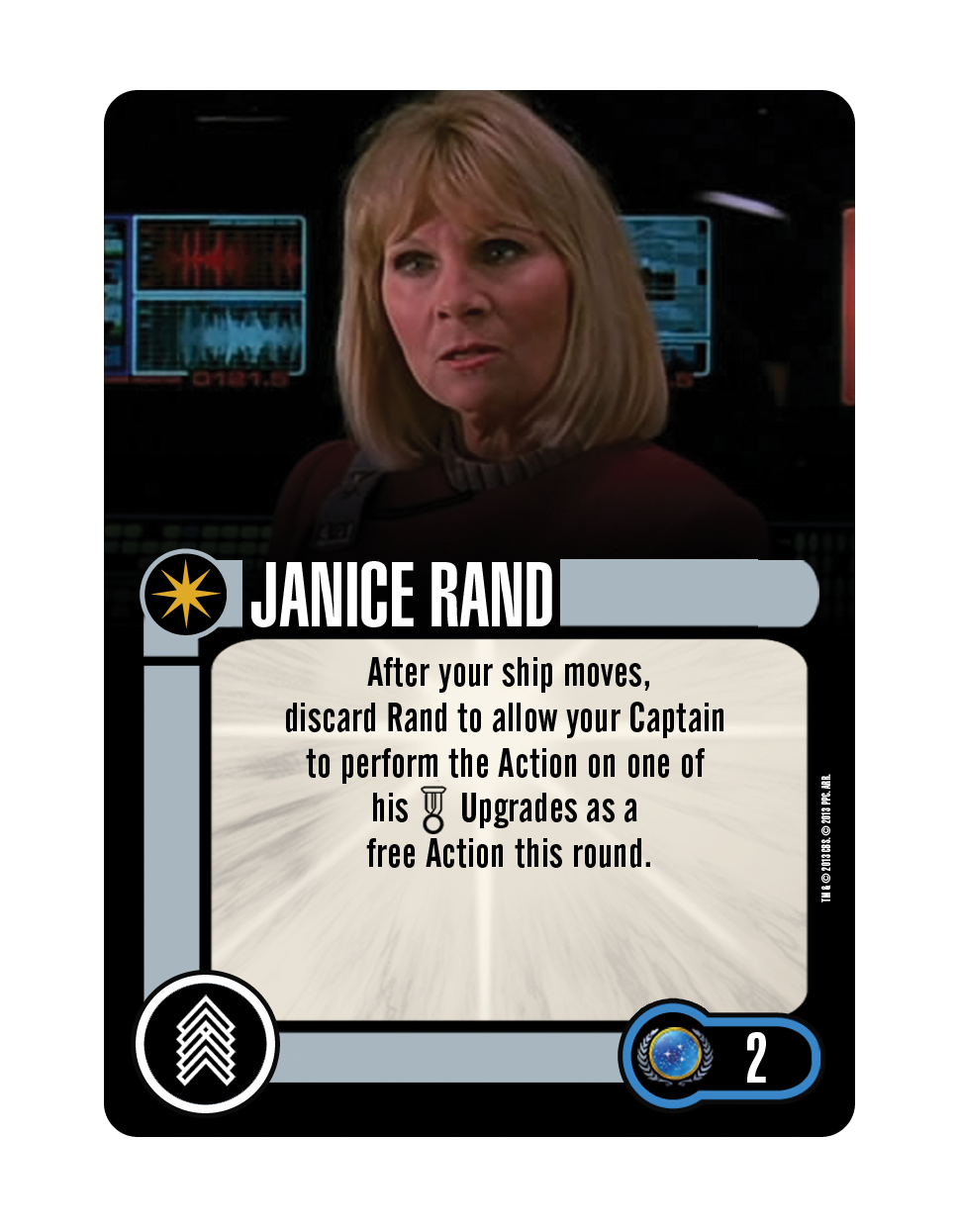 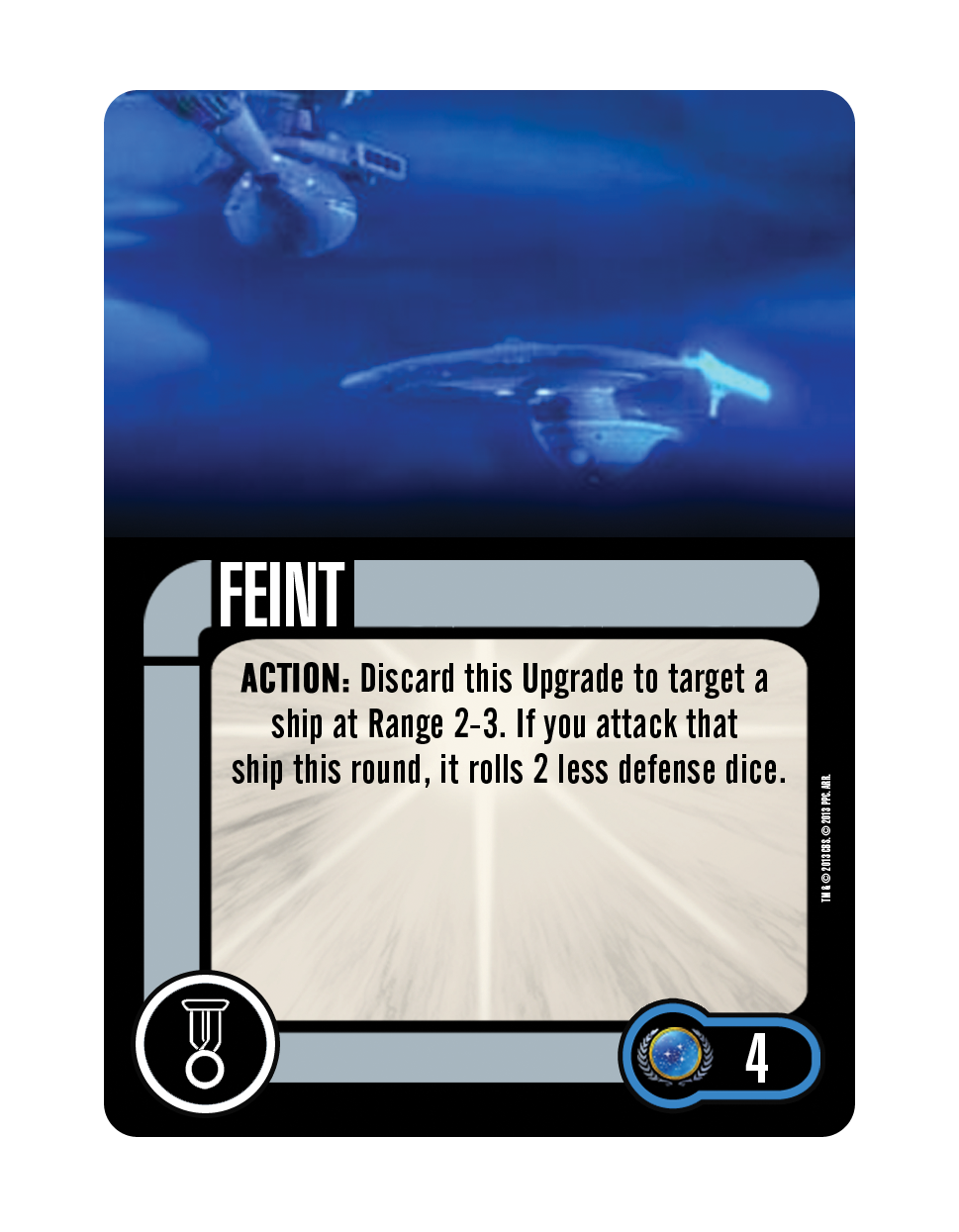 No matter how you decide to use all of the new cards to fill out your Fleet, the U.S.S. Excelsior will be on many player’s lists come December.  With great upgrades and all the tokens needed to play it, the U.S.S. Excelsior Expansion Pack is a fine addition to every Federation player’s fleet options.  Make sure you stop into your friendly local game store next week and pick up all of the new ships for Star Trek: Attack Wing!