Take Tabletop Gaming to a Galactic Level of Fun with Marvel HeroClix: Guardians of the Galaxy

Take Tabletop Gaming to a Galactic Level of Fun with Marvel HeroClix: Guardians of the Galaxy

WizKids Games, the industry leader in Collectible Miniature Games, is pleased to announce the launch of its latest HeroClix set, Marvel HeroClix: Guardians of the Galaxy, based on the upcoming feature film. 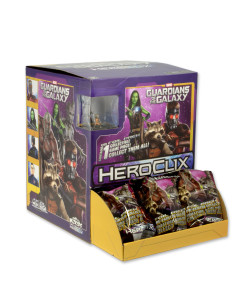 Get ready to relive the battle between Star-Lord and Ronan the Accuser! Featuring fan favorites like Rocket Raccoon and Groot, the new movie-based Marvel HeroClix: Guardians of the Galaxy is available now at your local game store!

For more information, please visit the following link. Can’t wait to play? Find a HeroClix event in your area with the all-new WizKids Event System today!

WizKids will have Marvel HeroClix: Guardians of the Galaxy on display in booth # 3145 at San Diego Comic-Con from July 24-27. For business-related inquiries or to schedule an appointment at Comic Con, please contact Jerome Gonyeau (jeromeg@necaonline.com).

Marvel Entertainment, LLC, a wholly-owned subsidiary of The Walt Disney Company, is one of the world’s most prominent character-based entertainment companies, built on a proven library of over 8,000 characters featured in a variety of media over seventy years. Marvel utilizes its character franchises in entertainment, licensing and publishing. For more information visit marvel.com.