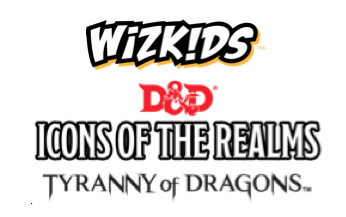 WizKids Games, the industry leader in quality pre-painted plastic miniatures, announced that the inaugural wave of D&D Icons of the Realms miniatures,based on the iconic Dungeons & Dragons roleplaying game from Wizards of the Coast is available in select stores now! 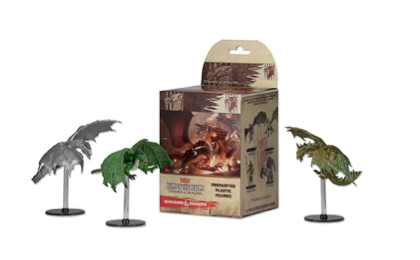 Inspired by the new Tyranny of Dragons storyline, players can expect to find dragons, kobold fighters, bugbears, wraiths, mind flayers, and many more iconic Dungeons & Dragons characters guaranteed to level up their tabletop RPG experience. Collect all 44 miniatures found in the D&D Icons of the Realms: Tyranny of Dragons booster packs today!

Just getting started with your collection? Wizkids recently announced the launch of the D&D Icons of the Realms Starter Set, the perfect supplement to the new Starter Set for the D&D tabletop roleplaying game. The 6-Figure miniatures Starter Set includes the 5 player characters featured in the tabletop roleplaying game Starter Set and are some of the most iconic classes and races from the Dungeons & Dragons universe, including the dwarf cleric, human ranger, Halfling rogue, Northlands fighter, elf wizard, and the famous drow ranger, Drizzt Do’Urden.

You can find out more about D&D Icons of the Realms: Tyranny of Dragons by visiting wizkidsgames.com/dnd

About Wizards of the Coast

Wizards of the Coast LLC, a subsidiary of Hasbro, Inc. (NASDAQ:HAS), is the leader in entertaining the lifestyle gamer. Wizards’ players and fans are members of a global community bound together by their love of both digital gaming and in-person play. The company brings to market a range of gaming experiences under powerful brand names such as MAGIC: THE GATHERING, DUNGEONS & DRAGONS, FORGOTTEN REALMS, and KAIJUDO. Wizards is also a publisher of fantasy series fiction with numerous New York Times best-sellers. For more information about our world renowned brands, visit the Wizards of the Coast Web site at www.wizards.com.