WizKids Games, the industry leader in Collectible Miniature Games, today announced that all players who register for the Marvel Dice Masters event at the 2014 WizKids Open will have the guaranteed opportunity to purchase a Marvel Avengers vs. X-Men Dice Masters Starter Set while at the event! But that’s not all! Wizkids is happy to partner with participating WizKids Open retailers to offer players a guaranteed opportunity to buy the Marvel Uncanny X-men Dice Masters Starter Set at their store during the event! That means registered players will get priority to purchase one copy of each of these starter sets (limit one per person). 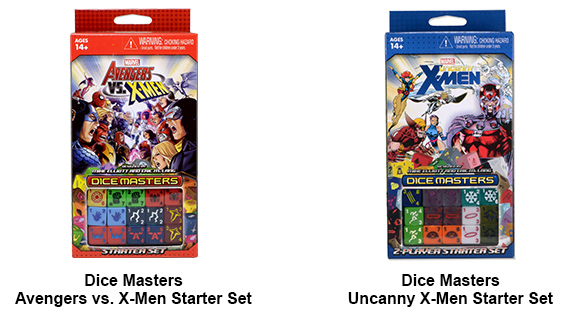 This year’s WizKids Open event will take place at seven game stores across the country.  Each location will be offering for-sale exclusive items and awarding special participation prizes to players as well as providing the opportunity to compete with the best players in their area. Featuring some of the hottest games of the year, including Marvel Dice Masters: Avengers vs. X-Men, HeroClix, and Star Trek Attack Wing, players will compete in head-to-head battles to earn glory, exclusive prizes, and their rightful place in the 2015 National Championships.

Seats are filling up fast so visit http://wizkidseventsystem.com/wko to find the event nearest you and secure your place in the 2014 WizKids Open!

Dice Masters fans be sure to check out the newly released Rainbow Draft format for play here!