Lead a mutant school and battle for control of the world

Based on Gale Force Nine’s popular “Spartacus: A Game of Blood and Treachery” tabletop game, “X-Men: Mutant Revolution” will allow you to play as classic X-Men characters, including Wolverine, Cyclops, Magneto, or Storm, as each leads a different school with unique powers and abilities. 2-4 players can take part in the mutant action, each recruiting heroes and students to their school, then training teams and sending them on missions to spread their school’s vision for mutants to the world. 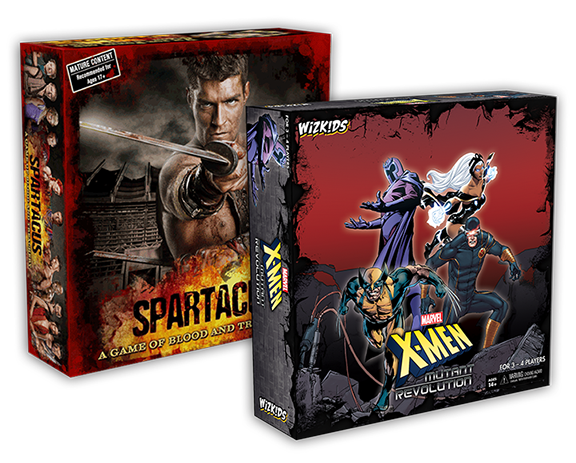 “When we played Spartacus: A Game of Blood and Treachery we were impressed with the ‘fun first’ approach inherent to the game engine,” said Justin Ziran, president of WizKids. “Our goal with X-Men: Mutant Revolution was to bring that fun-first experience to a new audience by using a top shelf IP coupled with our Combat Dial technology – the HeroClix dial – which simplifies record-keeping and streamlines gameplay.”

“Given our long-term relationship, this agreement was a great way to see the core mechanics from one of our games used for a different setting,” said John-Paul Brisigotti, CEO of the Battlefront Group, which includes Gale Force Nine. “The fit with the Marvel Universe is a good one and we look forward to seeing the material adapted in X-Men: Mutant Revolution.”

In the aftermath of the Phoenix event, new mutants are appearing all over the Earth. Wolverine, Cyclops, Magneto, and Storm each have a vision for the future, but will they unite humans with mutants or will they tear the world apart?

Gale Force Nine, LLC. (GF9) is a game company focused on making thematic, engaging games and premium gaming accessories. In addition to creating the highly acclaimed boards games Spartacus, Firefly and Sons of Anarchy, GF9 produces accessories, miniatures and terrain for use with Dungeons & Dragons, Flames of War and many other popular miniature games. Started in 1998, GF9 is located in Earlysville, Virginia. Gale Force Nine is a wholly-owned subsidiary of the Battlefront Group. Visit www.gf9.com for more information.