Welcome to the second article about the exciting world of D&D Attack Wing Miniatures Game. Today, Jay Kirkman, owner of Moonlite Comics in Frankfort, KY, dives into the popular 3BG build. Jay explains what the 3BG build is and shares his experience playing with it.

It didn’t take long, did it?

The game’s been out just a few weeks, and the Wild West that is the meta of any newly-launched title has already produced one build that’s getting no small measure of attention: the 120-point 3BG.

3BG is in reference to the unit composition of the build itself: three ballistae and a frost giant. It’s made appearances in tournament after tournament and — based on anecdotal evidence — it’s doing rather well for itself. I’ve been enamored of Calamity from the first time I cracked open the package, but while I’ve been known to run a pair of ballistae rather frequently, I wanted to see for myself what all the fuss was about.

Here’s what I built:

Most builds tend to go with battle cry for the frost giant fighter, but (foreshadowing a few mistakes I’d make with the big fella) I opted instead for the more defensive-minded mail because I’ve had some good experiences with it in the past. For her part, Sam came at me with a mega-breath build, happily paying the non-red tax to be able to give her main a brutal punch turn after turn.

Sam set up her trio of elves slightly off-center, after which I spread my ballistae out with a range 1 space or so between them as far forward as I could. I knew Sam was playing dragons, and conventional wisdom has highlighted the vulnerability of 3BG to breath weapons and other AOE attacks. This way they would still overlap their firing arcs, while hopefully being far enough apart that a cone would only pick up two of them at best.

In my first mistake of the night, I positioned the frost giant right behind the line of ballistae. I’d assumed that moving the ballistae forward 1 would give the frost giant enough room to move past them with a forward 3, but in fact this proved not to be the case. This left my giant stuck waddling behind the trundling Ballistae rather than being a force out in front, a misplay that would ensure my ballistae would soak up the brunt of the damage.

Sam’s counter-strategy was simple: enclose my ballistae in a pincer movement, then catch them all in a sea of breath weaponry. The trio of elves would race up the middle, giving some congestion to the midfield and helping to keep my forces contained. For my part, I was looking to break the frost giant out from the ballista prison I’d inadvertently caged him in. Sam’s pincer gave me just that opportunity.

Sam’s dragons streaked forward from the gate, with the Copper on one side and Balagos on the other. The elves took an exhaustion token to squeeze a little more movement out of them as well. Catching wind to what Sam was up to, I swung one ballista towards the left, with the centrally-placed Calamity and second generic ballista right to intercept Balagos. By the end of the second round, battle had been joined, and here’s how the battlefield looked on our futuristic “spelljammer” playboard: 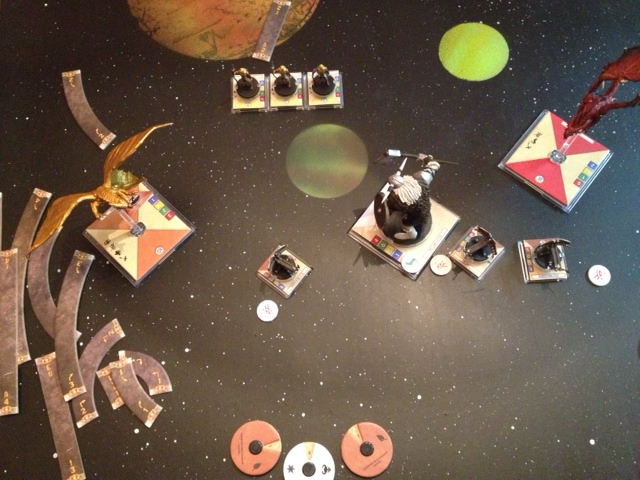 For the record, I’d placed target counters on each of my ballistae, and a charge on the frost giant that wouldn’t quite get him out of the way of Balagos, but would let him close in hard with the elves. Players familiar with other games have often expressed surprise with how lethal D&D Attack Wing can be, and Sam and I were under no illusions about how this round was going to go.

The Copper blasted an acid breath, hitting three of my four units (killing one), while Balagos brought the fire on the right. My charge against the elves crushed their point soldier, and luckily for me Sam rolled a critical on the morale check, causing an additional soldier to call it a day. After a withering salvo of bolter fire girded by target tokens and artillery master upgrades, though, both dragons were seriously wounded in this initial exchange. 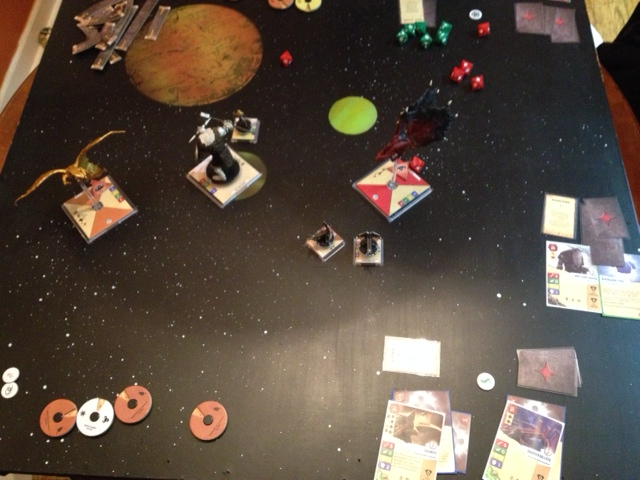 Next round I decided to gamble on Sam’s likely movement, and selected pivots for all three of my remaining units. The loss of actions and the additional attack die I’d offer Sam would be painful, but if I could catch her in overflight I’d stand a good chance at finishing off her scaly menace. That last elf would be offered a chance to raise the white flag.

Alas, Sam only opted to nudge Balagos forward and swoop, rightly choosing to end his movement behind my ballistae to keep him out of their range of fire. Luckily, her Copper was still in range of the pair of them, and the frost giant could hurl a boulder at Balagos for the kill. Sam briefly flirted with the idea of a slow breath (thus the token on the board below), but realized that the only one suffering under such an outcome would be her own Balagos. For his part, Balagos tore up Calamity like so much kindling and finished the job. 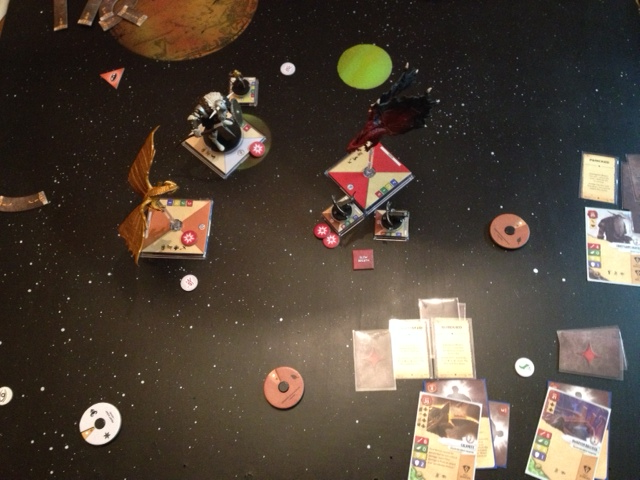 It did not come without cost, though, as both dragons were struck down as well under a coordinated assault. I’d actually feared the game was up when Sam’s Balagos parked behind me, but at the point of Sam’s concession here was the board state: 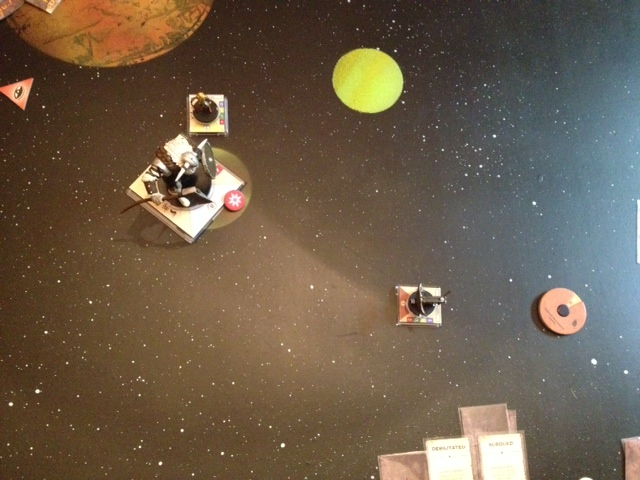 Chalk another one up for 3BG!

First, despite its inflated reputation, 3BG is far from unbeatable. Sam actually rolled somewhat poorly in the first round of combat, and could easily have had me down another ballista. In addition, though she came to the battlefield blind to what I was playing (as you would in a tournament), her mega-breath Balagos was a few too many eggs in one basket. I’m not yet convinced that paying above the odds for off-color breath weapons is worth it, but there’s been enough conjecture surrounding the tactic to make it worth a look.

Flying a pincer to catch my side in alternating blasts of dragon breath, though, seems a solid tactic. I might have gone a little leaner on Balagos and boosted up the elves a bit to give them some real punch in the center rather than being fodder.

Second, Calamity’s the real deal. The iconic version is superior everywhere it counts over the generic version, packing on an extra point of Primary Weapon Value (PWV) and armor, which is exactly where you’d want them to be. Not only that, but Calamity’s special ability to ignore non-critical armor penetration makes it very hardy against draconic opposition.

Lastly, the area I’ll be looking to explore in subsequent 3BG games is the margins of play. It certainly seems feasible for a swift opponent to streak down the extreme left or right side of the board, then cut in to attack the ballistae from the flanks. Given that the bolt throwers pretty much move forward at the speed of smell, an opportunistic Blue Dragon could find itself well-positioned for a lightning bolt attack on turn 3. 3BG brings loads of firepower to bear, but there are vulnerabilities, too. The secret to unlocking this strategy might be more in positioning and movement, and less in dice against dice.