Thanksgiving weekend saw Moonlite Comics host its first official tournament for D&D Attack Wing. Turnout was solid for a first effort, with a half-dozen players coming out to try their hands at The Price of Knowledge scenario, including two players coming from neighboring Ohio. There’s definitely an appetite out there for Organized Play!

I’d decided to run the “3BG” build I’ve been testing, knowing that especially in this early metagame it could put up a formidable amount of offensive power that would be difficult to deal with. This build, its name shorthand for “Three Ballistae and a Giant,” runs Calamity and two of its generic brethren alongside a frost giant fighter typically equipped with battle cry for the offensive boost. I also wanted to minimize my exposure to the scenario’s Vision tokens, having heard early reports that they could be a double-edged sword: great for Scenario Points, but difficult thanks to the Exhaustion tokens.

I kitted out all three ballistae with artillery master, adding point blank shot and dwarven precision to the iconic Calamity for extra punch. The frost giant fighter was there less for offense and more to congest the midfield, as well as to pop battle cry when I finally closed to range of my opponent. Given the scenario objectives, I regarded the slow move of the ballistae as a feature, not a bug, since I could nab early Vision tokens on the way to my opponent and still have a turn to shake off the exhaustion.

The big question for me was: what were my opponents running?

My first opponent paired the undead Lord Maximilian with Balagos, the red dragon, giving both a full kit of upgrades. My opponent — like many, relatively new to D&D Attack Wing but a veteran of other FlightPath games — surged forward, looking to close the gap as quickly as possible. Balagos stormed down the side of the board, looking to veer in the next turn and catch my forces in an area-of-effect (AOE) breath weapon. Lord Max, on the other hand, was sent directly at me to keep my ballistae busy, relying on an abundance of agility and incorporeality to make him a hard target.

Unfortunately for him, my early leftward bank with my row of forces easily kept both in arc, and my slow creep forward (moving with all 1s) let me start opening up early. Bolstered by the frost giant’s battle cry, I was throwing a ton of dice at my opponent’s two creatures — a vulnerability of concentrating your 120 legion points into just two units. Lord Max fell under the fusillade, but Balagos still had some life left in him as he overflew my artillery line.

That nevertheless put Balagos in a dreadful position, arcing around my back line as my turrets pivoted to follow him. I might not have gotten an action as a consequence of the pivot, but I was rolling dice by the handful. Though my opponent managed to destroy two of my three ballistae (one being Calamity), I notched my first win of the day. 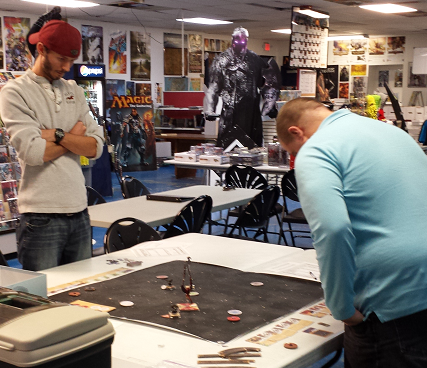 My opponent this turn was also running Lord Max, though cleverly with the rock catching upgrade (in lieu of Swift Strike). Max was joined by a potent Nymmestra, the sun elf mage, and a lone, unupgraded hobgoblin whose purpose in life seemed more to collect visions than to alter the tides of war.

I set up about the same as I had initially, with my opponent splitting his forces. Max and the mage would begin on opposite sides of the board, with the hobgoblin directly ahead of me to nab an early Vision token.

This let me repeat the same tactics as I had at the outset — move forward, then swing left. My rightward turret caught the hapless hobgoblin at extreme range and pulped it without missing a beat. Undaunted, my opponent advanced with Max, but had Nymmestra skulk around the back to try and get a good angle for a fireball or disintegrate without exposing her to undue harm.

He also made the tactically sound decision to take Max to ground immediately. Since wraiths move the same at any elevation, this did him no harm whatsoever while allowing Max to serve as a screen should I try and snipe at Nymmestra (ground troops attacking through other ground troops forfeit an attack die). This might not have been wise had I been running any melee upgrades (such as Frost Battle Axe), but in the absence of those it was a canny call.

The reticence at committing Nymmestra might have prolonged her lifespan, but it also allowed me to focus fire on Max. Even with the extra agility from rock catching, a battle cry coupled with target actions and artillery master upgrades (standard-issue for any ballista I field) meant that my opponent’s side of the battlefield soon began to resemble the Battle of Verdun. It took my giant, Calamity, and a ballista to down Max. Nymmestra fell to the remaining turret, but only after she’d launched a fireball that nearly killed it (and wounded two other units). 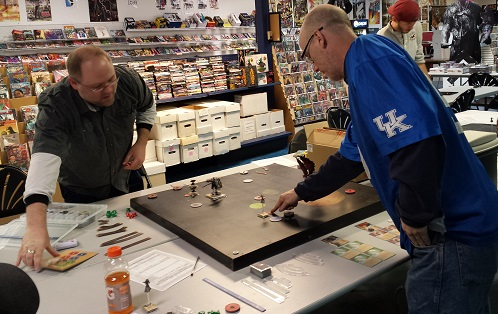 Final round: fight! My opponent this time paired a Calamity of his own alongside Lord Max, and I’d hoped that the disparity in mobility would give me another opportunity to solve threats one at a time. As it happened, though, I was in for the fight of the day.

My opponent placed his Calamity across from my forces and near a vision point for an early token, while opting to place Max farther away from me near the corner. Although Max couldn’t hit as hard as Calamity in terms of raw dice, I saw him as the bigger threat overall thanks to create spawn and fife drain, as well as his armor penetration. Few things are more frustrating than to hammer in on a wraith, only to see it claw its way back to health if you fail to finish it off in time. Towards that end, I put my rightmost turret on Calamity, and swung the remaining troops towards Max.

I almost got him, too.

Max quickly raced forward to engage my line, scoring some at-range hits on the frost giant that let his Calamity finish the job… one turn before I’d planned to pop the battle cry. He paid a high price for his perfidy, though, as he was brought to the brink by two beautiful critical hits and a regular one. Although I’d prayed for a double damage result to secure the kill, I had to settle for debilitated (-1 attack) and hamstrung (-1 Agility). Despite the early loss, I felt I was still in a fairly good position.

That all went to seed the next turn. Max squared up on my leftward ballista, nicking it for 1 and using Life Drain to flip over a critical hit. With Max still in arc, though, I was confident I’d be able to finish him off — but then my opponent activated swift strike, whisking Max to safety. The anticipated quick victory turned to ashes as I lost my rightward ballista to his Calamity.

Next turn I was compelled to turn my attention fully towards Calamity, unwilling to pivot to draw a bead on Max and leave myself exposed in the back. I caught two lucky breaks. First, his Calamity whiffed on a rapid reload that would almost certainly killed off another ballista. Second, his Lord Max picked up a vision token, and the exhaustion would hamper his range.

Still, despite having more Legion Points’ (LP) worth of units on the ground with Calamity and a ballista, I felt my opponent held the advantage. Both my turrets were facing away, which meant that the best tools in my arsenal could not be brought to bear (no action with a pivot).

Even exhausted, Max has quite a bit of mobility, and he closed in on my battered ballistae with a ruthless and hungry look. Taking down one of my cannons would not only allow him to heal up, but would also turn the tide with a create spawn. As Max rushed in, I pivoted my generic ballista and sought to give the more-wounded Calamity a little more room by executing a turnabout. Next turn I moved the ballista forward so that it could get a Target token, and pivoted Calamity.

The wily Max, having shaken his exhaustion, leapt forward 3 and overlapped the base of the ballista by just a touch, but it was enough to allow him to spring over the primed ballista and land next to Calamity- — not at all what I’d wanted to happen. It all came down to dice, though, and when the smoke cleared Calamity was still up — and Max had finally been finished off. 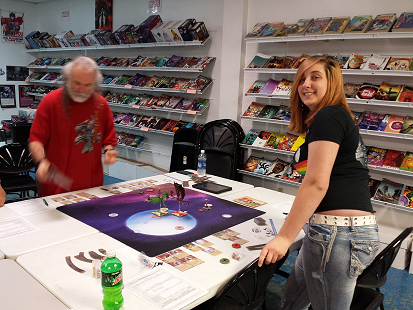 The 3BG build continues to impress, though it’s not without its vulnerabilities. My last-round opponent exploited these very adroitly by forcing me to divide my attention ahead and behind at the same time. A nimble opponent that can get in amongst the ballistae can wreak havoc, especially when I have to start getting into the pivot business. Even the iconic Calamity still only has a Level of 7, meaning I have to commit to decisions others can react to very early each turn.

The more I see swift strike in action, the more I like it for Max. Max is a higher level than all but three units in the game right now (Nymmestra, Jarl Horn, and Arviaturace), and so will usually get to pull off a hit-and-run.

Surprising: Max-anchored builds averaged 77.44 Scenario Points per game in this tournament. Builds without him? 101.22.

Given how quickly opposition seeks to close with my turrets, Point Blank Shot was better than I expected, especially given that it doesn’t require an action to use — it’s always on.

Finally, I really enjoyed the added challenge the scenario play delivered, especially because it wasn’t all bonus and upside. The exhaustion effects could have serious consequences in the game, and brought a very different dynamic to the table.

Earning a white dragon, well… that didn’t hurt either. My daughter Samantha even won one for Fellowship! 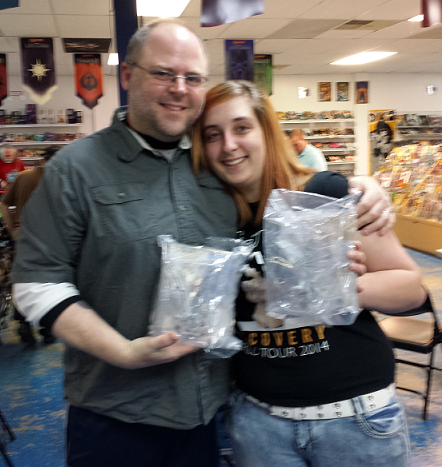