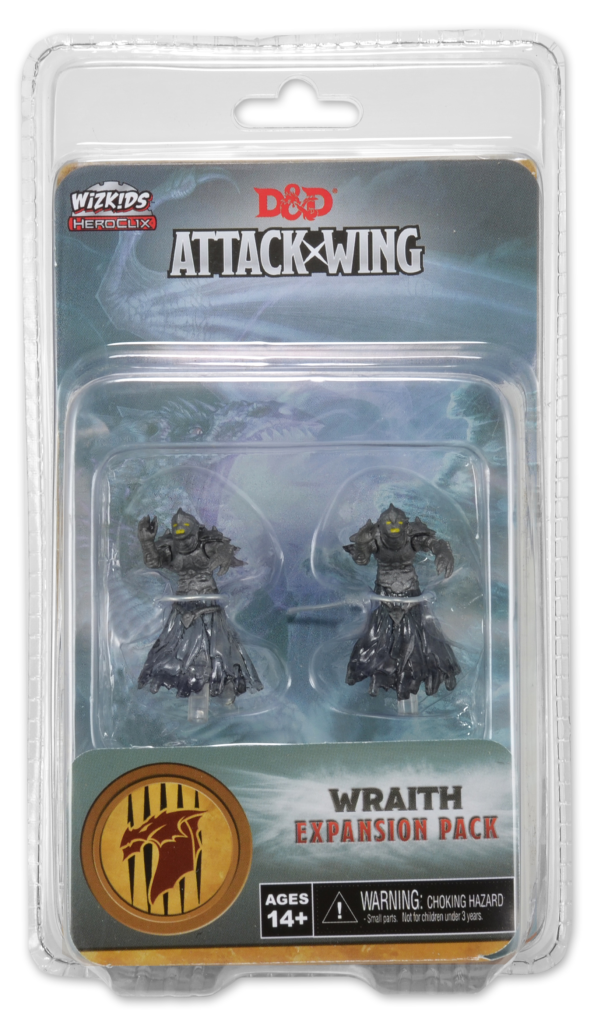 Today we’ll be taking a closer look at one of the early all-stars of D&D Attack Wing, the solo wraith. The wraith may not feel like a “solo,” given that there are in fact two figures in the Wraith Expansion Pack. When you discover, though, that one of the wraith’s upgrade cards (Create Spawn) lets you raise up a second wraith from a fallen foe, it makes better sense to see them as another single-unit expansion like the Sun Elf Wizard or Dwarven Ballista.

The Wraith Expansion Pack contains the most expensive single unit in the game to date, Lord Maximilian. Weighing in at a full 50 Legion Points (LP), even un-upgraded you still have a force to be reckoned with. He’s very nimble, with a wide array of Green and White maneuvering, including a short-range turnabout: just the tool you’ll need to be able to outwit your foes in maneuvering. In addition, the feint action gives you tremendous agility as to where you finally end up. Although it costs an action and exhausts you, being able to slip out of a ballista’s firing arc or slide in to the blind spot of a dragon gives you a great deal of tactical advantage. Finally, Lord Maximilian also has a “burst of speed” ability which lets him use his action to make an additional move, giving him an effective forward movement range of over 4 — without exhausting him!

Adding to the wraith’s toolkit is the Incorporeal keyword. Reflecting the fact that wraiths are insubstantial undead (meaning they don’t have a physical body, but are composed of negative energy), this keyword enables the wraith to pass through physical obstacles and obstructions. In a similar vein, this lets them bypass a creature’s armor when making attacks, which is incredibly powerful. Since Armor Value is a component of a unit’s LP cost, running wraiths effectively means you’re starting the game with a higher LP army than your opponent (just as if you’d brought along a Ray of Enfeeblement upgrade against a ballista army).

Finally, the ghostly wraiths are hard to hit, and Lord Maximilian can convert one Concentrate result to a Dodge when defending against a primary weapon. Add this to his Agility of 4 (highest in the game alongside a single Harper Legion Elf) and Armor of 1, and you’ve got a very survivable unit that can dish out some ferocious hits while turning circles around lumbering opponents.

The generic 25 LP wraiths are an altogether paler shade of Lord Max. Having half his Primary Weapon Value (PWV) and half his agility is to be expected when the unit costs half the Legion Points, but what holds the generic wraith back most is also having half the attacking range as the iconic version. Carrying a Range 1 melee attack with no ranged option is a painfully narrow attack window that leaves little margin for error. A flying unit that ends up coming to rest in your forward arc can easily opt to land, denying you the opportunity to attack. 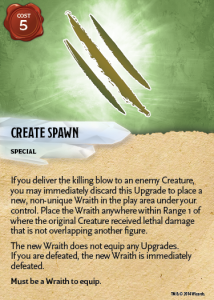 One of the splashiest wraith upgrades surely must be Create Spawn, for presently it’s the only way in the game to add a completely new creature to the field once battle has been joined. The prospect of a free 25-LP reinforcement is tempting indeed, but does it live up to the promise?

In a recent tournament I played, half the field was running Lord Maximilian with Create Spawn, and in three rounds of play only one spawn was created. For the other two games, it amounted to little more than empty LP. For my money, I’d much rather have something that consistently gives me a smaller advantage rather than one that occasionally fires for a big one.

Part of the problem lies with Lord Max himself. To use a baseball analogy, this is the sort of upgrade you’d rather give a cleanup hitter than a leadoff man. At Level 13, Max will usually be hitting first, leaving your other units to finish off the wounded foe. But because Create Spawn requires Max to make the killing blow, Create Spawn won’t trigger. This is one ability whose status as an auto-include is currently in jeopardy for me. 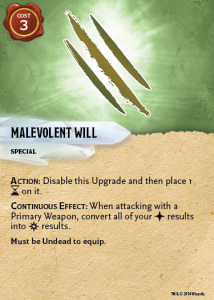 What a tradeoff — forego rerolling any attack dice with a Target action and instead have all your hits be critical ones for a turn! We can all dream of raining crits to one-shot a hapless foe.

With a Target action letting you reroll misses, your sweet spot is 2-3 hits, which you’ll get around 67% of the time, and you’ll almost never completely whiff (only about 2% of the time there). Without a Target action, that sweet spot drops to 1-2 hits (around 63% of the time). Not only that, but your chance of missing completely spikes to around 16%, making this a bit riskier of a proposition.

If it’s crits you’re chasing, don’t overlook the fact that with a Target action you’ll be in good position to see some naturally come up on the dice, too. Around 40% of the time, you’ll get a critical hit this way, with another 13% of the time nabbing a second to go with it.

Against more agile opposition, these numbers look even worse for proponents of Malevolent Will. Let’s say Max is going up against Nymmestra, with an Agility of 3. Without any rerolling, that sweet spot becomes 0-1 hits, which happens almost 70% of the time (completely missing almost 40% of the time!) — a painful outcome when you’ve staked the use of an upgrade on the action.

So where does that leave Malevolent Will? In short, the more agility your opponent has, the worse it gets. For opponents with low agility, though, your most common Target outcome is 3 hits, while with Will your most common outcome is 2 crits. Critical hits can really hinder a unit, though, so you might find that trade-off works for you.

On the other hand, if you’re playing a Nymmesta of your own with Leadership, you can live the dream and have both: a reroll of the attack dice, with all hits flipping to critical. Now that’s brutality! 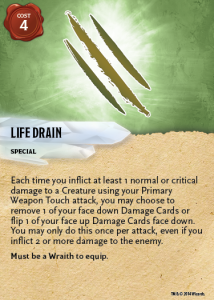 Unlike the previous upgrades, the virtue of this one is beyond question. Getting an extra reward for doing what Max already wants to be doing (attacking) is not to be passed up. The only time you will regret spending LP here is if Max never gets injured — in which case, you’re winning anyway. 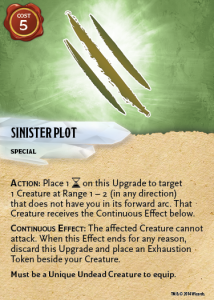 Sinister Plot is one of those very conditional upgrades that’s great when you can make the most of it, and frustrating when you can’t. The chief difficulty isn’t the drawback of losing your action and exhausting Max once the effect ends. Rather, it’s the condition that your target cannot have you in their forward arc.

As we’ve noted above, though, Max is a master of movement and dexterity, so that’s not as difficult a requirement as it might be for some. Attacking is at a premium in this game, since battles typically tend to resolve after a small number of turns. The loss of even one of those can be painful. 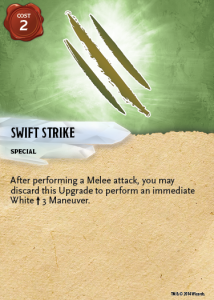 Hands up time: I actually didn’t rate this one all that highly until I started having it used against me. Seeing Maximilian run up, swing at one of my units, then dash out of reach behind me grew frustrating very quickly. Sure, it’s a one-use card and it can often leave Max facing the wrong way. But remember, Max can turnabout quite easily compared to most, and behind enemy lines is often exactly where he wants to be. 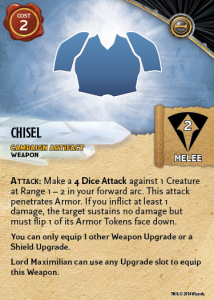 This campaign artifact is attuned to Lord Maximilian, letting him use a Monstrous upgrade slot to equip it. Its effect is a simple one: if your attack hits your opponent, that unit sustains no damage but loses a point of Armor Value instead. That’s not a bad effect, but most of the time I’d rather just wound my opponent outright instead. I might consider wielding Chisel if I was pairing Max with lower-attack creatures who might not easily get past armor otherwise.

What does the Jarl say?

Because the wraith is a monster, that means that it can be kitted out with monster upgrades from other units. Right now, the only other such creature is the frost giant, though more are right around the corner.

Battle Cry is a very solid option considering Lord Maximilian’s level will exceed nearly anything you are fielding. The problem there is that (given Max costs 50 LP un-upgraded) you’re not likely to be fielding a lot of units alongside him. This upgrade works great in builds with lots of creatures to maximize the bonus, which isn’t what you usually end up with running Lord Max. Rock Catching has the virtue of being relatively cheap — only 3 LP for a wraith — and you could do a lot worse than to add another die of Agility against ranged attacks.

All in all, Lord Maximilian packs a ton of advantage into his small-base package. With the upcoming Organized Play Month 2 allowing for blind-box play, players will be bringing 90-point legions rather than 120 to the table. You can be sure that in that environment, Lord Max is going to continue to make an impression, and his reputation as one of the game’s prestige units seems well warranted.

About the Author
Jay Kirkman first sat behind a DM screen at 9 years of age, and he’s never looked back. In addition to gaming and D&D Attack Wing, his passions include his family and five children, the mighty Glasgow Celtic, and operating his business, Moonlite Comics. Located in the capital, Moonlite has been at the heart of gaming in the Bluegrass for over a generation. They are proud to add D&D Attack Wing to their stable of fully-supported games.