It’s an embarrassment of riches! If you’ve been with D&D Attack Wing from the start, you’ll recall it wasn’t that long ago we had a bit of a drought of figures after Wave One. And while there’s no guarantee that further issues with the port system on the West coast won’t offer further disruptions, we’ve certainly been spoiled for choice lately as Waves Three and Four have touched down right along with the blind booster Organized Play figures.

With Wave Four now out and Wave Five recently spoiled on The Dice Tower, we’ve got plenty of new options to upgrade our armies. Whether you’re angling for the 90/30 Legion Point OP split with the blind boosters, building for the “constructed standard” of 120 LP, going for the mass battles of the 200 LP level, or something all your own, there a number of new units and upgrade cards to enhance your chances for victory.

Today we’ll be looking at what Wave Four has to offer. 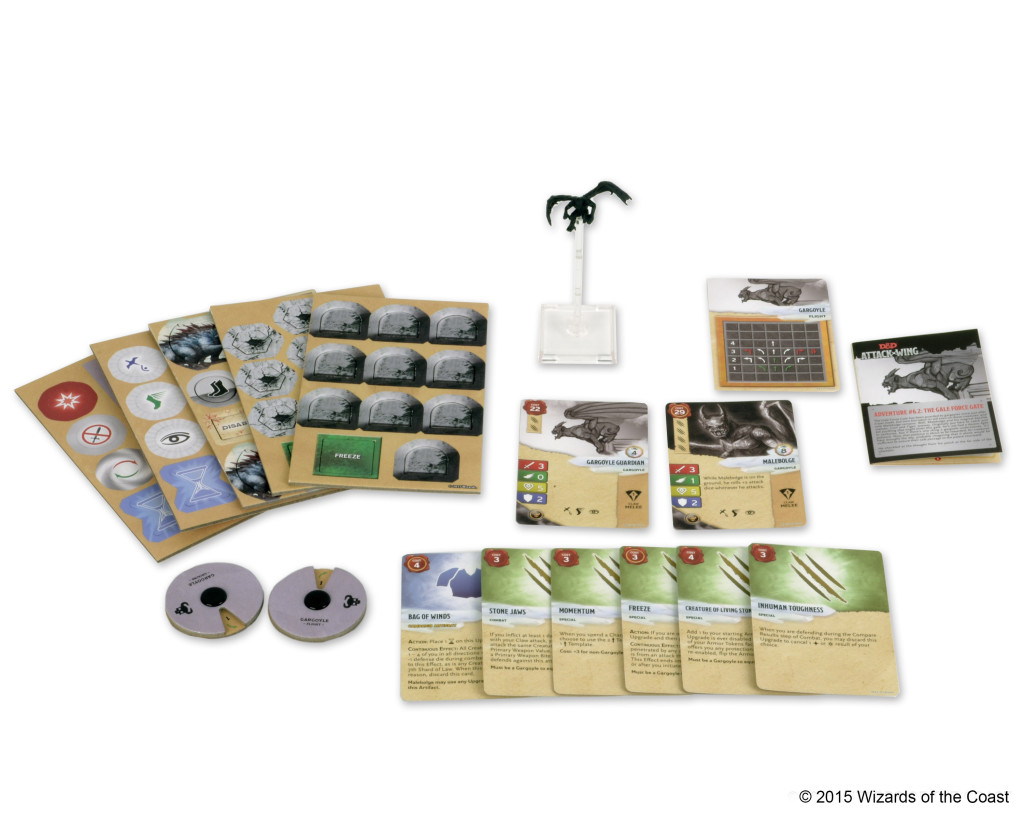 First up is the gargoyle. With this unit, we have another rather intriguing narrow-niche specialist, much in the same way that Arveiaturace, for example, is a melee specialist. For its part, the gargoyle is a melee ground attacker that comes equipped with flight. That might sound a bit peculiar, but it makes sense when you look at what the unit wants to do.

Most of us by now are accustomed to using the air as a primary means of travel for flying creatures, only typically going to ground to pivot (especially when using ancient dragons who lack a wingover maneuver), thwart an attack from a lower-level creature, or for a scenario objective such as the compass from OP2. The idea that we’d want to lose all of the advantages of air travel while making ourselves more vulnerable to groundling melee forces seems silly on the face of it. 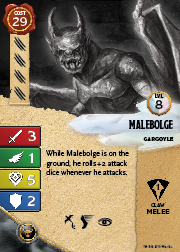 That is, until we see that the narrow-niche of the gargoyle is the fact that it actually performs better on the ground! Malebolge, the iconic gargoyle, gets a substantial boost to its Primary Weapon Value when the wings are tucked away. Then you’ve got the Freeze ability, which only functions while on the ground.

Freeze is the first of a few upgrades this time around that mimic effects we’ve already seen on iconic creatures. In this case, Freeze gives your gargoyle the similar impenetrable effect we see on Calamity. 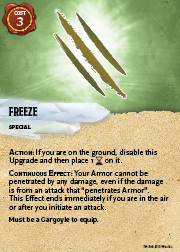 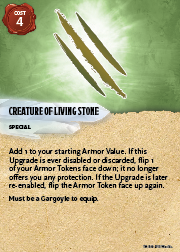 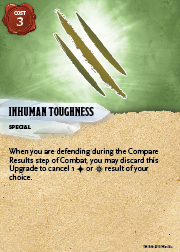 Freeze is even more formidable when paired with Creature of the Living Stone, which passively ups your Armor value. The Inhuman Toughness upgrade further bolsters the gargoyle’s resilience, letting you throw it away to cancel a hit or critical. Though you’d almost always want to save it for a critical result, there will certainly be times where this upgrade is the literal difference between life and death. 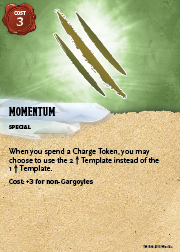 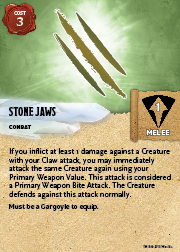 Momentum offers another ability we’ve seen before, this time on Jarl Horn. This one doubles the distance you travel when executing a charge, which is a great way to close the gap with your opponent. Stone Jaws falls into the Close Quarters category of attacks that, when successful, let you make additional attacks. This is a common feature, and it’s nice to see that unlike Close Quarters, there’s no reduction in the amount of attack dice you’ll get to throw on your bonus attack. 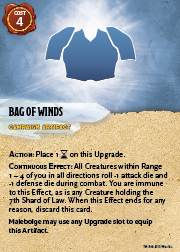 Finally, there’s Bag of Winds, a wide-reaching debuff that affects everything around you with a Bestow Curse effect. Forewarned is forearmed; this upgrade makes no distinction between friend and foe, nor flight and ground. Interestingly, there is an immunity you can prepare for if you own the Aarakocra Troop in the 7th Shard of Law.

The gargoyle doesn’t share well with others, with half its upgrades unique to its type and a fourth costing twice as much for non-gargoyles, but there are some upgrade cards it will happily appropriate from other units. Cruelty (Harpy) fits right in with the melee nature of the gargoyle, giving you the ability to ignore a point of Armor each turn. Ferocious (Wyvern) improves your damage output, while Swift Strike (Wraith) can help you escape from danger after performing an attack — although given the Gargoyle’s low levels it’s not quite as effective as it has been on other units. 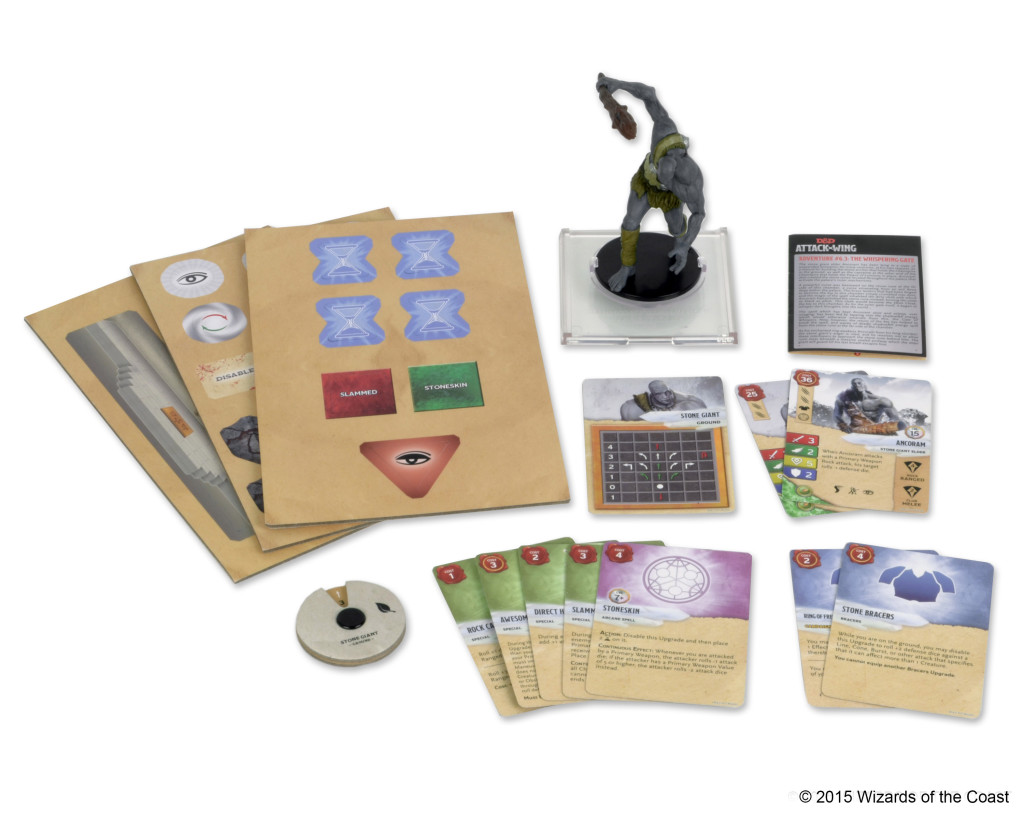 Next up we’ve got the stone giant, the second giant we’ve seen in the game after the frost. In the Ordnung, the social system that determines the rank and status of all of giant-kind, stone giants have lesser status than frost giants, but Ancoram’s having none of that altmodisch thinking! Clocking in a level higher than Jarl Horn, Ancoram presents a more balanced stat line with a little less offense in exchange for survivability. Also unlike the Jarl, who liked to mix it up with his foes in the heat of battle, Ancoram prefers to strike from a distance — his targets roll one less green die when they’re on the receiving end of his rock. 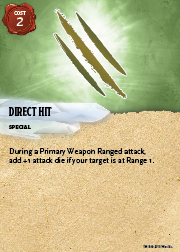 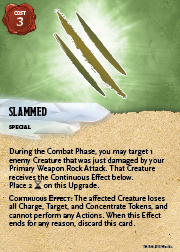 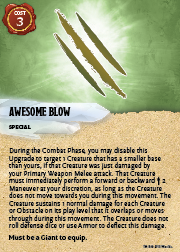 Fittingly, Ancoram’s upgrades are equally split between offense and defense. For offense, we’ve got the monstrous version of Point Blank Shot (Sun Elf Troop) in the optimistically named Direct Hit, which gives you an extra attack die if your target is right up on you when you reach for your rock.

Slammed gives you a chaser effect for your ranged attack, knocking any non-Dodge action tokens right off of the target and preventing actions from being taken for the next turn. Given his high level, there aren’t a lot of foes that are going to attack before Ancoram, making this ability especially relevant.

Sometimes, though, only the blunt end of the stick offers the proper motivation to your enemy, and that’s when Awesome Blow comes in handy. If you’ve managed to damage them in melee, you can use this upgrade to send them reeling. If they happen to go careening into their friends, so much the better — they’ll be taking additional, unavoidable damage! 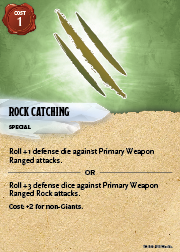 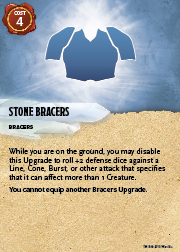 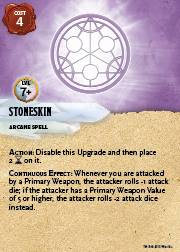 For defense, Rock Catching makes a return appearance, but we get some new options in Stone Bracers and Stoneskin. The Bracers are a hedge against area-of-effect (AOE) attacks, giving you extra defense dice when caught in one. Stoneskin, meanwhile, hedges against hard-hitting opposition by reducing the number of attack dice rolled against you. 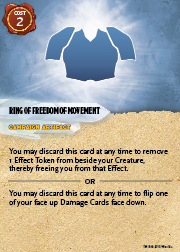 Finally, the stone giant’s campaign artifact is the Ring of Freedom. This useful artifact seems quite attractively priced at 2 Legion Points, giving all the benefits the dragons have enjoyed with Legendary Resistance to anyone with an equipment slot.

Some of the game’s other upgrades will go well with Ancoram. Battle Cry (Frost Giant) is an obvious choice, while Monstrous Aim (Harpy) jumps to the head of the line for giving a tremendous boost to Ancoram’s ranged attack. 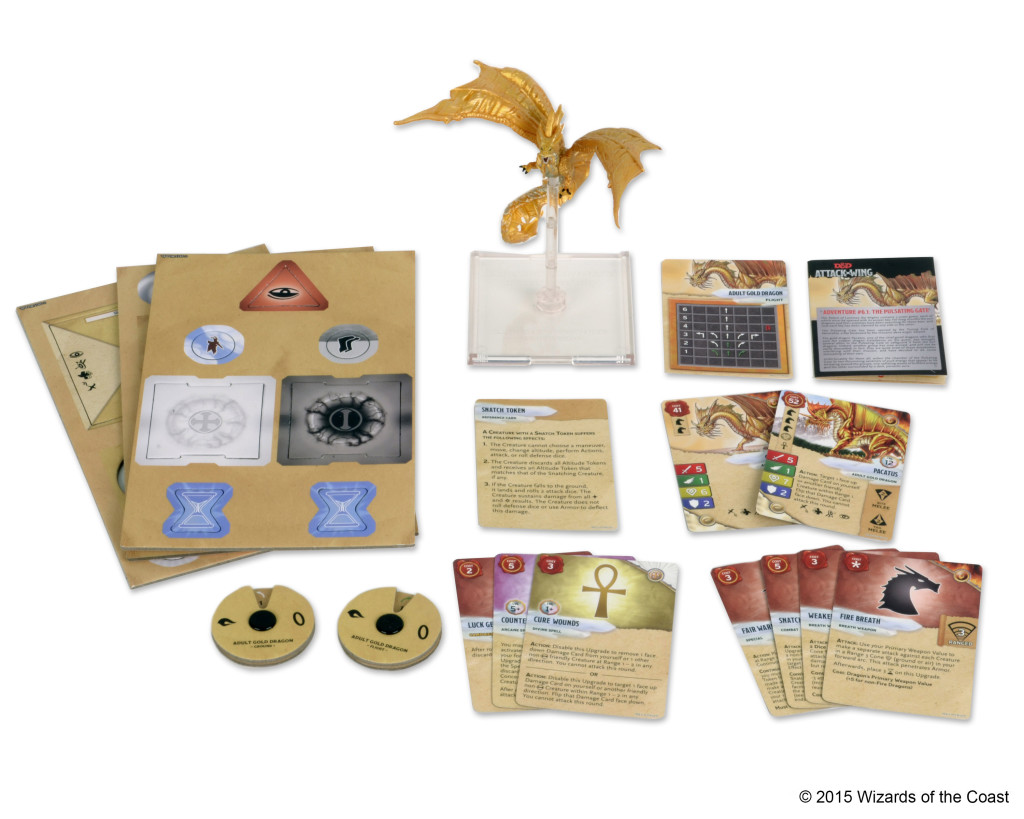 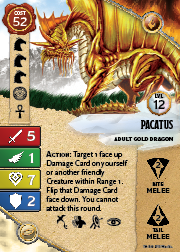 Now, what would a wave of new units be without a dragon? Although the evil dragons jumped out to an early lead, good has been slowly gaining ground, and the mighty Pacatus is the strongest of them all thus far. Pacatus is a selfless battlefield presence, whose iconic special ability allows you to heal yourself or your other units. We’ve seen this before on Sarpiel, the movanic deva angel, but where Sarpiel allowed you to get rid of face-down damage, Pacatus instead mends the most grievous of wounds back into minor injury. Play both units and voila, you’ve got a paramedic squad that would be the envy of any modern hospital. 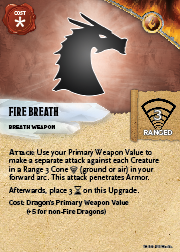 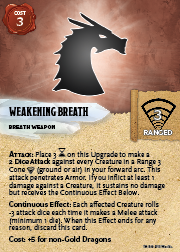 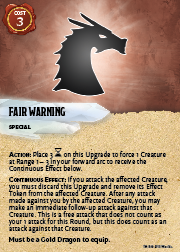 Pacatus’s stat line is on par with what we’ve seen from other large dragons, though the only other dragon with access to both an arcane and a divine slot is the Starter Set’s classic blue, Eshaedra. Like other good dragons, we get two breath weapon upgrades in the Fire Breath (which we saw previously with Balagos) and the one-shot Weakening Breath, a brutal debuff that takes your opponent’s offensive legs out right from beneath it. 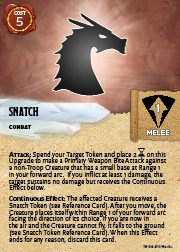 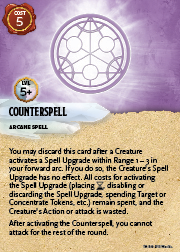 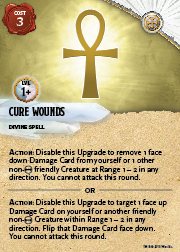 The rest of the upgrades are an intriguing bag of some of the game’s most creative effects thus far. Fair Warning is a bit like Hellish Rebuke (Rezmir), which turns your unit into a porcupine that punishes anyone brash enough to strike them. Snatch lets you take hold of a small-base unit and whisk it aloft, taking it for a ride next turn. If it doesn’t fly and you’re in the air, it can even take a bit of damage as it plummets earthward after you let go. Perhaps best of all, the snatched creature can’t move or attack, so you’ve effectively blanked them for a turn.

The gold dragon has a couple of spell upgrades as well. Counterspell is anathema to spellcasters, allowing you to nullify whatever it was they were attempting to cast simply by discarding the upgrade. Cure Wounds, meanwhile, is a smaller healing spell than Prayer of Healing that also lacks the prayer’s ability to deal damage to negative-energy creatures. In a world filled with Lord Maximilians, having that option made taking a curative spell more palatable for the Legion Points. Cure Wounds is strictly healing, but the field for good divine upgrades is fairly thin right now when compared to their arcane counterparts. 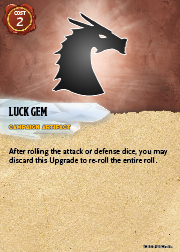 Finally, for the artifact we get the Luck Gem, a cheap little draconic add-on that lets you (once per game) do a full reroll of all your attack or defense dice. Just the thing when you need a clutch result and come up with nothing!

As for other upgrades, the gold is fairly middle-of-the-road as dragons go, with a special ability on the iconic that’s entirely self-contained. That means there aren’t a lot of draconic upgrades you can use to synergize with it, but you’re still at liberty to pick and choose what playstyle you like for your dragon. Some to consider might be Searing Flames (Starter Set) which deals additional fire damage or Flame Breath (Brass Dragon) if you like to snipe with your breath weapon rather than sweep.

That’s it for Wave Four, which was a big treat to fans of monstrous creatures. Since we won’t be seeing any again until Wave Seven’s Pegasus, I’ll be keenly looking forward to seeing what folks come up!