For those of you unfamiliar with our beautiful state of Kentucky, Louisville is the largest city in the Commonwealth. A little less than two hours down Interstate 64 is Lexington, the second-largest. Nestled in between the two is the state capital (and home of my store), Frankfort, and we’ve been excited to find that there’s a game store in each point along that axis that has enthusiastically jumped into D&D Attack Wing.

You might recall in my tournament report here a couple months ago we traveled to Louisville for a tournament. This time, we’ve headed the other direction to Lexington’s Rusty Scabbard, for an afternoon of flying the unfriendly skies. Team Moonlite was represented by myself, Donald Williams, and Russell Catlett, and there were blind boosters to open and dragons to be won! 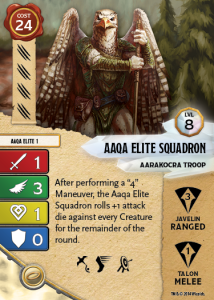 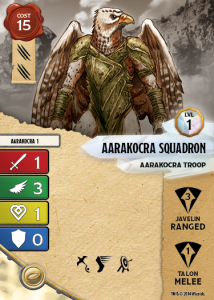 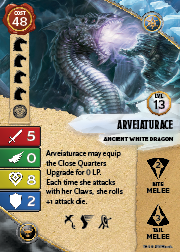 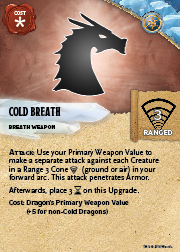 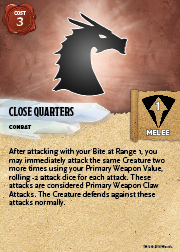 I decided to give another run-out to a build I’d been having some OP2 success with, which fields a full flight of aarakocra alongside a tanky Arveiaturace (with Cold Breath and Close Quarters). The tournament organizer for The Rusty Scabbard, Scott Cox, had taken first in a tournament at Moonlite with it, and his build and tactics had intrigued me from the start. Making a small tweak (adding Monstrous Aim over Dive Attack, keeping Scatter!) had seen me repeat Scott’s success at my next tournament — would the build manage a three-peat?

When the blind boosters hit the table, I opened Ontharr Frume, the Paladin. Ontharr is perhaps the easiest of all the blind booster units to build: simply leave out Sacred Plate Mail (nice as it is), and you can jam every other upgrade onto him and end up at 29 Legion Points (LP). With turnout at a healthy seven players, I set up my maneuver templates and prepared to do battle.

My first-round opponent was Steve Lawson, and at the end of the night when the fellowship ballots were being passed out, his was the name on mine for two reasons. First, because Steve’s one of those doing the most to help build a regional community around D&D Attack Wing, and second because he was running Sycorax. 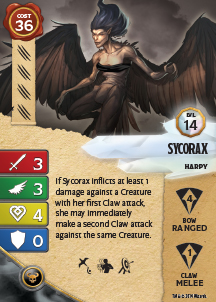 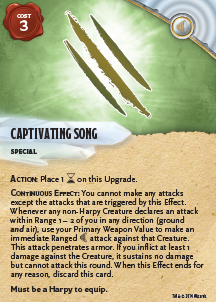 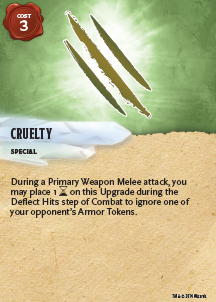 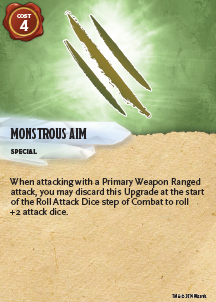 A Wave Three figure, the harpy hasn’t made a huge impact on the metagame yet, but Steve was eager to see what she could do. I set up with Arveiaturace on my left, facing Sycorax. My aarakocra were in the center, pairing off with Steve’s Rezmir, with Ontharr Frume on my right looking across at Calamity. Aware of the dictum “Troops beat ballista beats dragons beats troops,” I steered my flock rightward right off the bat. I set up the center for a Rezmir-Ontharr showdown, with a slightly cantered Arveiaturace arcing for the center as well.

The harpy only throws three dice, so I felt I could safely ignore her — after all, her most obnoxious ability is the Captivating Song that can potentially make me waste my attack on her, so I figured I’d go after the other stuff and finish off the harpy last. I also wanted to keep Arvie away from Calamity as best I could.

It didn’t quite go that way.

Steve banked Calamity center-ward from the outset, and Sycorax as well from the opposing side to meet Rezmir coming up the middle. To my surprise, Sycorax almost immediately began carving up Arveiaturace, with no small assist from some good rolls and Cruelty, which let her ignore a point of the White’s armor. And while Arveiaturace would go on to become my first casualty, taking two shots from Calamity before being dropped by the harpy, the aarakocra would be the all-star of the match.

After looping around to come up the rightward flank, they squared up on Calamity. Monstrous Aim and a Target token proved to be a lethal combination, as Calamity went down under a withering rain of arrows from the flock. They then did a turnabout, and closed on the center dais to intercept an equally triumphant Sycorax.

Meanwhile, the two groundling units, Ontharr Frume and Rezmir, had already begun their dance in the center of the table. Before dying, Arveiaturace had taken a good chunk out of Rezmir, but a finishing blow was still needed. Rezmir’s Hellish Rebuke, too, had helped chisel down the flying White battlecruiser.  Given a huge boost to mobility with the Warhorse, Ontharr was able to outflank Rezmir and deliver the killing stroke.

Sycorax hadn’t been idle, though. She savaged the paladin at point-blank range, bringing him to the verge of death saved only by a fortuitous role of the green die. With Cruelty, Dive Attack, and Sycorax’s own double-strike special ability, Ontharr was lucky to be alive. At last, the birds completed their turnabout, though, and they honed in on the harpy. A couple ranged attacks later, the game’s in hand.

I had a familiar opponent awaiting me for the second round: Donald. Don ran a Lord Max + Ballista build, and opened Dragonfly the Grey. I hadn’t run into too many druids, so I was quite curious to see one in action. Donald sets up his three units fairly close to one another, with Lord Max on (my) left, the ballista in the center, and druid on the right. I set up with Arveiaturace in the lower-left corner again, with the birds just off-center-right and Ontharr Frume on the far right. With Warhorse, Ontharr can just eat up the ground. A first-turn 3 forward becomes a 4 (action: Charge), then a follow-up 1 sharp left becomes a 2. Just like that, Ontharr was in the middle of the board, galloping in to catch someone broadsides. 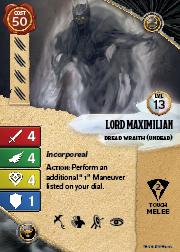 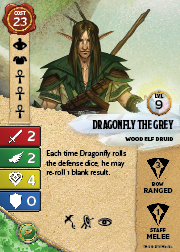 Arveiaturace and Lord Max met nose-to-nose, but Donald’s Initiative token all but ensured he’d get the better end of the deal. After smashing Arveiaturace with a couple criticals and some damage, he popped Swift Strike to whisk Max to safety. Because of Arveiaturace’s angle, though, “safety” still put him within range of a tail attack, but I only managed to land a single, critical hit. 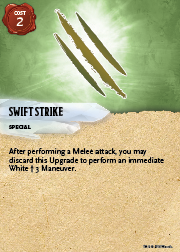 When it comes to maneuverability, there’s no contest — Lord Max will carve up an oil tanker like the white dragon, so I opted instead to leave Max in my rearview mirror and press forward with the dragon. The birds, meanwhile, gave me an encouraging early edge when they took out the dwarven ballista, again showing the power of Monstrous Aim. This card alone has proven to me time and again that just because a card is discarded, doesn’t mean it should be discounted. Indeed, many of the game’s strongest effects are one-use-only, and the birds take full advantage. Sadly, Ontharr Frume didn’t survive the round, and he and the ballista went out together.

Then Donald made the play that absolutely broke my back. Through Control Weather, the druid managed to snare both Arveiaturace and the aarakocra wing in its effect, forcing both to the ground. Much slower now, neither managed to get out of the way for the next turn’s hammerblow of Call Lightning. Arveiaturace didn’t survive. Meanwhile, Lord Max had been biding his time, avoiding the tempest to come. Down to just two aarakocra, Donald’s rout was complete, and winning a mere formality.

For my final round I was up against Kevin Ray, who ran a Jarl Horn + Eshaedra build alongside Talon Everheart, the ranger. I’d set up the same as I did in the last game, while Kevin placed the Jarl in front of Arveiaturace, the ranger in the center, and Eshaedra just off-center. The opening exchange came from both Jarl Horn and Arveiaturace charging one another in the second round. The dragon took some hits — including two criticals — but savaged the giant in return. 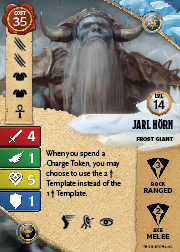 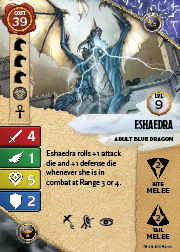 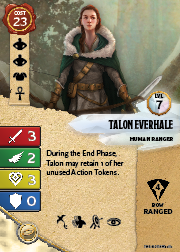 Next turn, Jarl Horn executed a turnabout while the crippled dragon glided forward 1. The Jarl threw a rock, the dragon swished its tail, and the result was one dead Jarl — and a wounded Arveiaturace. Meanwhile, Kevin moved both Talon and Eshaedra towards my left, closing in to finish off the dragon. Eshaedra’s lightning breath did the job.

Back to me, Frume had executed the same plan of attack as I outlined above, and was able to score a critical hit on Eshaedra before she passed out of range. The birds, too, managed to get in some ranged attacks, and by the time the paladin caught up with the ranger, it didn’t take much to finish the job.

Kevin did well to keep me struggling to anticipate his moves, but a turnabout from Eshaedra to come back the other way left her exhausted, and easier to predict. My aarakocra wing, having executed a turnabout of their own, were able to come in on her six, just outside of Range 2. That meant they could keep up a stream of fire on her, and she couldn’t reciprocate with her tail. Ontharr was dreadfully out of position, but the birds were having a terrible time landing a blow. Down to four attack dice, I still had to overcome her 2 armor and — after shaking the Exhaustion token — her Dodge token.

With Eshaedra’s breath back online, she went to ground at the edge of the map and pivoted to come about. Ontharr grabbed the Compass and headed for the exit, figuring if the birds could harass and harry the dragon, Ontharr could win me the game on objective. Time was called, though, and we were in the last round of the match: attrition or nothing. 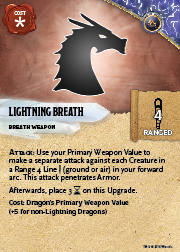 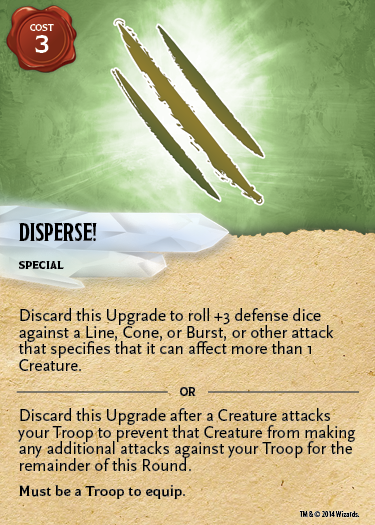 Kevin managed to catch three of my remaining four aarakocra in-arc for Eshaedra’s lightning breath, but thanks to a timely Disperse! I was able to dodge all of the damage. The bird-men fired back, and the final, fatal blow was dealt!

Thanks to the loss, I only placed third, but I was heartened to see my teammates bracketing me at second and fourth.