In March of 1941, Joe Simon and Jack Kirby created one of the most influential and well-recognized characters in comic book history.

Marvel HeroClix: Captain America will be available in two different exciting ways to collect! The first will feature more than 60 figures in standard five figure boosters, while the second is a 10-figure HeroClix expansion available in single figure boosters in a Counter-Top display.

Be sure to add Captain America to your HeroClix collection today! 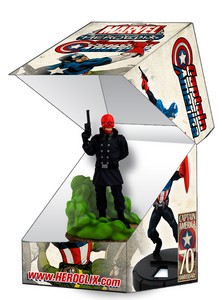 Celebrating 70 years of comic book history, Captain America's allies and enemies will be spotlighted prominently in this long awaited addition to the HeroClix universe. Sub-themes in the set will include the Serpent Society, S.H.I.E.L.D. Hydra, recent fan favorites the Secret Warriors and more! And for the first time ever in HeroClix, this expansion will feature figures with removable elements, all with in-game effects and abilities!

And be sure to ask about how to get your exciting "Buy It By The Brick" exclusive Nick Fury, L.M.D. HeroClix figure!

The Captain America Counter-Top display features sculpts also found in the Marvel HeroClix: Captain America expansion but with completely new dial designs, and for the first time ever in HeroClix, the Captain America 10-figure expansion introduces multiple dials on some standard-size figures! Now fans have even more options when constructing their forces!

Download the 2011 Heroclix Rulebook by clicking on the link below: (4mb)
HC Rulebook 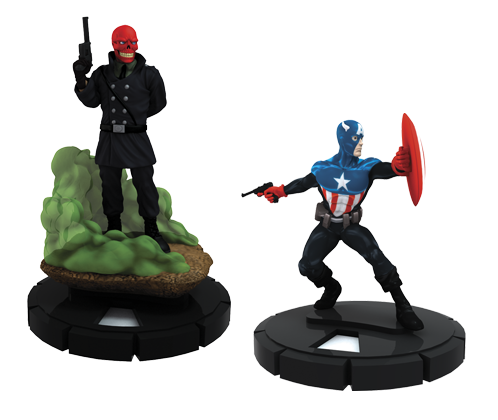