Faster Than a Speeding Bullet, Superman Rockets Into HeroClix!

Celebrating over 70 years of history, Superman comes full circle in this dynamic HeroClix Set that hits the market this September!

DC HeroClix: Superman brings all of the action and amazing power that only the Last Son of Krypton can deliver, and where Superman treads, his greatest villains and allies cannot be far behind!

This fall, DC HeroClix: Superman will be available in two awesome formats: standard five figure boosters featuring 58 exciting new figures to add to your games, including 6 new characters from the critically acclaimed and pivotal Flashpoint storyline from DC Comics, as well as a six-figure Fast Forces pack!

Be sure to add Superman to your HeroClix collection today! 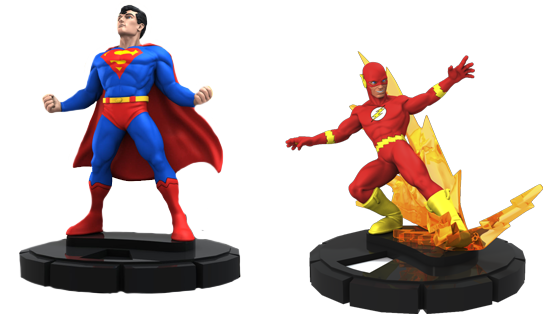 More powerful than a locomotive, DC Heroclix: Superman depicts your favorite heroes and villains from Superman's long and storied career, as well as sub-themes that include Reign of the Supermen, Legion of Super-Heroes, World of New Krypton, and All-Star Superman!

The DC HeroClix: Superman standard booster product also features an all new, in-pack Buy It By The Brick Robot Superman figure! For the first time ever, the Buy it By the Brick figure will be available in the brick itself contained within an unmarked 6 figure booster!

Download the 2011 Heroclix Rulebook by clicking on the link below: (4mb)
2011 HC Rulebook